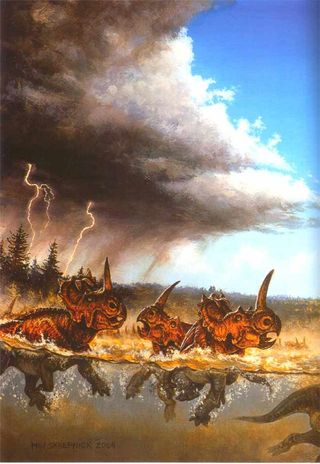 A herd of centrosaurs (a type of horned dinosaur) drowning in a flood millions of years ago in what is now Alberta, as depicted in this illustration. They left behind what could be the world's largest dinosaur graveyard.
(Image: © Royal Tyrrell Museum.)

Scientists have revealed what may be the world's largest dinosaur graveyard.

The dinosaurs may have been part of a mass die-off resulting from a monster storm, comparable to today's hurricanes, which struck what was then a coastal area.

The findings could help solve a mystery concerning why the badlands of western Canada are so rich in dinosaur fossils.

The roughly 76-million-year-old fossil beds apparently hold thousands of bones over an area of at least 568 acres (2.3 square km), skeletons that belonged to a roughly cow-sized, plant-eating horned dinosaur known as Centrosaurus. This treasure trove provides the first solid evidence that some horned dinosaur herds were much larger than previously thought, with numbers easily in the high hundreds to low thousands, said senior research scientist David Eberth, a paleontologist and geologist at the Royal Tyrrell Museum in Alberta.

The "mega-bonebed," which consists of 14 smaller bonebeds, lies in northern Alberta near Hilda, Canada, right by the border with Saskatchewan. The graveyard was actually discovered in 1997, but confirmation of the discovery's size was detailed this month in the book "New Perspectives On Horned Dinosaurs" (Indiana University Press, 2010). [Illustration of centrosaur herd]

Alberta is extraordinarily rich in fossils, such as those of duck-billed dinosaurs, horned dinosaurs including Triceratops, ankylosaurs, raptors related to Velociraptor, and tyrannosaurids such as Albertosaurus and Tyrannosaurus rex. The area was home to a remarkable diversity of other animals as well, including birds, pterosaurs, alligators, turtles, lizards and mammals — in fact, scientists recently found mammal tooth marks on dinosaur bones in Alberta.

Back when these centrosaurs lived, Alberta was warm and lush, and encompassed lowlands on the western coast of the Western Interior Seaway, a vast inland sea that divided what is now North America in half. The way the fossils are linked together in the same layers of earth within these bonebeds suggests all these centrosaurs were wiped out simultaneously.

The likely culprit in this scenario was a catastrophic storm, which could quickly have routinely made the waters flood up as high as 12 to 15 feet (3.6 to 4.6 meters), if experiences with modern floodplains are any guide.

"The flooding could have reached more than 100 kilometers (60 miles) from the shoreline," Eberth told LiveScience. "The landscape basically just drowns."

The flat area would have provided no high ground for escape, leading to thousands of animals drowning in the rising waters.

"It's unlikely that these animals could tread water for very long, so the scale of the carnage must have been breathtaking," Eberth said. "The evidence suggests that after the flood, dinosaur scavengers reentered the area, trampling and smashing bones in their attempt to feast on the rotting remains."

These storms could also help explain why fossils are so abundant in the badlands of western Canada overall, "and why they are often found preserved so exquisitely," Eberth said.

Coastal floodplains such as those seen in modern Bangladesh can cover vast areas, with flooding killing hundreds of thousands of livestock, not to mention the human tragedies that occur.

"Because of their size and the scale of the flooding, dinosaurs could not escape the coastal floodwaters and would have been killed in large numbers," Eberth explained. "In contrast, fish, small reptiles, mammals, and birds may have been able to escape such seasonal catastrophes by retreating to quiet water areas, the safety of trees and burrows, or simply by flying away."

The researchers now hope to take lessons they have learned in Alberta to compare it to other parts of the world in an effort to pinpoint signs of past catastrophes elsewhere.