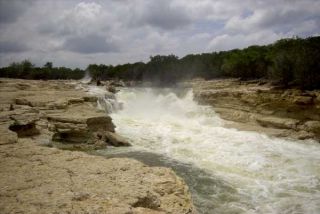 Some of the most spectacular canyons on Earth and Mars were probably formed in the geologic blink of an eye, suggests a new study that found clues to their formation deep in the heart of Texas.

Lake Canyon Gorge, a 23-feet- (7-meter-) deep canyon in Comal County, Texas, was carved in just three days by a flood in 2002. The flood scoured a swath of greenery, leaving sand-colored bedrock rubble in its wake.

"It was just a little v-shaped ditched before, but all that material was busted out during that event," said engineer Tom Hornseth of Comal County, Texas.

Data gathered at this gorge will help researchers reconstruct the formation of ancient canyons.

A single catastrophic flood capable of cutting into bedrock is extremely rare, but the Comal flood gave scientists a front-row ticket to an event similar to those from the planet's distant past.

Researchers climbed into the canyon, measured the rate and volume of the flood and took aerial photographs to document the rapid erosion. Their study is detailed in the June 20 early online edition of the journal Nature Geoscience.

Gorges are typically formed along pre-existing river channels. The Grand Canyon was formed as the Colorado River slowly wore down the bedrock. That probably took millions of years though, said geologist and study co-author Michael Lamb of Caltech in Pasadena, Calif.

Rapid gorge carving is a baffling example of how incising bedrock doesn't take millions of years. At Lake Canyon Gorge, a single burst of water carried away heavy rocks, a process known to geologists as plucking. These sedimentary rocks were already broken down into pieces weighing a couple of tons, but exactly how this happens is not well understood, Lamb told OurAmazingPlanet.

Rapid megafloods may have formed canyons in the distant past as glacial ice dams released trapped water. Large floods may be responsible for the formation of some Martian canyons as well, the study suggests.