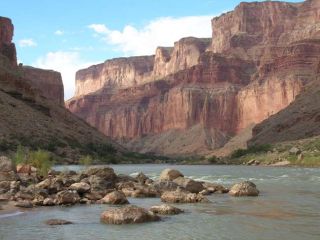 A view of the thick sequence of limestones that contain numerous caves in the Grand Canyon.
(Image: © John "Doug" Powell)

The Grand Canyon seems to be fixed in time, but it is hardly permanent, and lately, neither are geologists' estimates for its age, sparking what one scientist calls "the Grand Canyon Wars."

While a recent study in the journal Science suggested that the Grand Canyon was about 16 million to 17 million years old (much older than previously thought), a new study, detailed in the journal Geology, argues that geological evidence still supports the long-standing age of 6 million years.

The new study also proposes that the carving of the canyon's iconic burnt-orange walls by the Colorado River was triggered by tectonic uplift.

The Science study had dated mineral deposits in cave formations in one layer of the Grand Canyon. The deposits, called mammillaries, form when the mineral calcium carbonate precipitates out of the water and deposits on the existing rock walls.

These formations, also called speleothems, form when the water table is at the level of the caves, and so give a record of when the river cut past that particular layer of rock, said co-author of the Science study Carol Hill, of the University of New Mexico.

Hill and her colleagues used the dates to propose that an earlier river had begun to carve out the western end of the Grand Canyon around 16 million to 17 million years ago. Around 6 million years ago, the eastern and western portions of the Grand Canyon connected, allowing the Colorado to flow all the way through, eventually carving out the 277-mile (446-kilometer) long and 1-mile (1.6-kilometer) deep canyon that exists today.

The study created a stir amongst geologists who study the Grand Canyon and spurred what Hill calls "the Grand Canyon Wars," with other geologists writing in responses to their paper and submitting studies of their own, one being the new Geology study.

"We're saying something new," and people don't always like that, Hill told LiveScience.

The new study was done by another University of New Mexico team. These geologists took issue with the assumption by the Science team that the lowering of the water table which formed the speleothems was a result of the river incising into the rock.

"The main problem is the assumption that the water table dropped as a result of carving of the Grand Canyon," said study leader Karl Karlstrom. "It's very easy to disprove that assumption, because the present water table today has been drilled right below Grand Canyon caverns" and lies 400 meters (1,312 feet) below the surface, whereas the canyon is 1 kilometer (0.62 miles) below the surface.

"So the water table today is not tracking the river incision," he told LiveScience.

Karlstrom said the aquifer system in the canyon is what is called a "perched water table," where groundwater percolates down from the surface through layers of rock until it hits one that is impermeable. So the water table can be held at a different level than the river.

"So the fact that the water left a particular cave might be due to a regional drawdown of the water table — that's what they assume — but there's a lot of other ways it can happen in terms of more local effects," Karlstrom said. "For instance, when a side canyon carves into the cave system, you could breach a cave and empty the water out."

Hill counters that this is a lack of understanding of the water system under study. While what are called vadose zones do feature a perched water table, the water in them moves too fast to form speleothems, Hill said. "Those aren't the caves we're talking about."

What she and her team were looking at were artesian aquifers, where water is more slow-moving and you don't get a perched water table, Hill explained, so the lowering of the water table could have tracked the incision of the river.

Hill says the theory she and her colleagues put forward in Science also explains why a particular limestone formation is found at the mouth of the canyon, while Karlstrom's theory can't. The calcium carbonate-saturated water that formed the mammillaries also likely formed that limestone, she said. "Those two are directly related."

They also have a theory as to why the incision rates differed.

"We propose a mechanism for that, which is the asthenospheric upwelling, deep mantle upwelling, which is causing the edge of the [Colorado] Plateau [where the eastern end is] to go up relative to the Basin and Range [the land area where the western end is]," Karlstrom said. And the incisions only started about 6 million years ago, he maintains.

Karlstrom says that the "idea of a young landscape shaped by tectonics, which is driven by deep mantle flow, is a really exciting, new way to look at the landscape. It's not just a passive landscape that's where the river's cutting down through an elevated plateau, instead, there's faulting, there's earthquakes, there's volcanoes, there's uplift in the western U.S."

Both Hill and Karlstrom agree with certain points in each other's papers, but they differ in their interpretations of the majestic landscape and their theories on how it formed.

"This is typical of science, where people have different ideas," Hill said. "We're not mad at each other or anything."