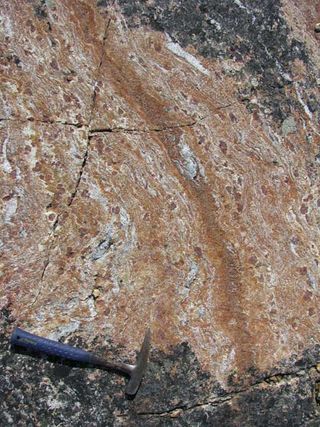 Every rock tells a story. And some of those stories are about the history of life.

You might think rocks and the minerals they are made of are rather boring. But a new study shows life has been integral to the evolution of minerals, giving rise to the majority of the 4,300 or so types present on Earth today.

The research, detailed in the November issue of the journal American Mineralogist, could aid the search for life on other planets.

The study also ushers in a new way of framing the study of minerals, said study team member Robert Hazen of the Carnegie Institution in Washington, D.C. Instead of lumps of rock that are characterized by their basic physical and chemical properties, each mineral sample "has a history, has a story" because it was created by a particular process at a particular point in the history of our planet.

"Minerals have never been looked at in this historical context," Hazen told LiveScience.

Minerals that exist now on Earth and other bodies in our solar system gradually formed in what Hazen and his colleagues see as a series of stages. Each stage has a precipitating event that drives mineral evolution forward, toward greater diversity (more new types of minerals form).

All of the chemical elements known today were present back when the solar system was just a collection of pre-planetary primordial dust, but they formed only about 12 minerals — "the most primitive minerals," as Hazen put it. "Those are the raw materials that you start with."

It was only after large bodies such as the sun and the planets formed that environments with extreme temperatures and pressures existed that could forge a larger diversity of mineral species. Many elements were also too widely dispersed in the original dust clouds to solidify into mineral crystals.

Stage 2: Meteorites clumped together into planetesimals and high temperature and pressures created hundreds more minerals, bumping the total up to about 250.

Stage 3: As larger planet-sized bodies formed, volcanic activity and the presence of water could have given rise to several hundred more new mineral species. Mars and Venus, the new study suggests, have reached this stage with at least 500 different mineral species, but nowhere near as many as what developed on Earth. Mars is "a wet planet that sort of reprocesses" its surface, resulting in several types of clay minerals. (These clay minerals have been found on Mars by NASA rovers, landers and orbiters, indicating that liquid water was indeed once present on the surface of the red planet.)

Stage 4: Only on Earth — at least in our solar system — did mineral evolution progress into a wealth of thousands of minerals.

"Mineral evolution is obviously different than Darwinian evolution — minerals don't mutate, reproduce or compete like living organisms. But we found both the variety and relative abundances of minerals have changed dramatically over more than 4.5 billion years of Earth's history," Hazen said.

A key factor in Earth's mineral diversity is the churning of the planet's interior by plate tectonics, the process that drives the slow shifting of the continents over time.

Stage 5: With the onset of plate tectonics, slabs of Earth's crust were subducted down into the hot mantle, a new physical and chemical environment where minerals could form, boosting the number of minerals on Earth into the thousands.

"That's where you get this great bump up in the number of minerals," Hazen said.

If you're wondering where Stage 4 went, it is the creation of granites, which have been found on Earth, but not elsewhere. Granites may have added another 500 minerals to Earth's repertoire. Plate tectonics pushed that number to about 2,500.

But the biggest impact on mineral evolution came with the origin of life on Earth approximately 4 billion years ago, Hazen said. All five additional stages after Stage 5 are "all associated with life" and occur only on Earth, he said.

"Of the 4,300 known mineral species on Earth, perhaps two-thirds of them are biologically mediated," he said. "This is principally a consequence of our oxygen-rich atmosphere, which is a product of photosynthesis by microscopic algae."

The first manipulation of minerals by life came as microbes used them for energy, subjecting them to reactions that transformed them chemically. More than half of the elements on the periodic table can be used by life to drive metabolism, Hazen said.

"Life transforms the chemistry of the surface," he said.

Many important minerals, such as ores of iron, copper and other metals, are products of oxidation (a chemical reaction involving oxygen that causes the loss of electrons; rusting is one example). These reactions wouldn't be possible without the oxygen in Earth's atmosphere, which exists courtesy of photosynthetic plants and algae.

Microorganisms and plants also accelerated the production of clay minerals, typically formed in the presence of water.

In the oceans, the evolution of organisms with shells and mineralized skeletons, such as corals, generated thick layered deposits of minerals such as calcite, which would be rare on a lifeless planet.

The idea for the work came during a Christmas party when a biology colleague asked Hazen if clays existed during the Archean (a geologic eon before about 2.5 billion years ago), because clays are though to have possibly helped jump start life by organizing organic molecules — if they weren't present during the Archean, they couldn't have been instrumental to life.

Hazen said of the link between Earth's history and mineralogy: "Why didn't we think of this before?" (There were clays in the Archean, by the way, just not as many as there are today.)

Hazen and his colleagues didn't have to do any new experiments; they just drew on the existing knowledge of the field and reframed it, particularly pointing out the role of life in enhancing mineral diversity.

The new finding’s implications extend well beyond our planet. Looking for minerals strongly associated with life on Earth could help guide the search for life on other planets, by giving scientists a set of clues to look for.

"For at least 2.5 billion years, and possibly since the emergence of life, Earth's mineralogy has evolved in parallel with biology," Hazen said. "One implication of this finding is that remote observations of the mineralogy of other moons and planets may provide crucial evidence for biological influences beyond Earth."

Finding clays, for example, can indicate the presence of water, at least in a planet's past. This would let us know that a planet had reached Stage 3, just as Mars has.

"The surface mineralogy is going to reflect the state of mineral evolution" on that planet, Hazen said.

Hazen also hopes that looking at mineral evolution will revitalize the science of mineralogy, which he says "is a field that has become more and more marginalized," with museums and universities ditching their mineral collections. Mineral evolution will provide "a sweeping narrative that [can] put minerals back at the center of Earth history," he said.