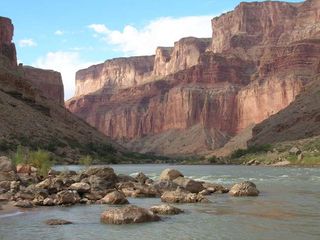 A view of the thick sequence of limestones that contain numerous caves in the Grand Canyon.
(Image: © John "Doug" Powell)

It's been an icon of the majesty of nature, a popular subject of photography and a must-see vacation destination, yet the Grand Canyon's exact age has long been a mystery. Scientists now say that at least part of the canyon is 16 million to 17 million years old. The canyon's towering walls, with their endlessly alternating layers of rusty red and burnt orange-colored rock, serve as a vertical timeline of Earth's history extending over one billion years. But while the age of the sediment layers has been well-established by geologists, settling on an age for the canyon itself was a bit trickier. In recent years, geologists have bandied about two different theories on when exactly this natural wonder began to form, said Carol Hill of the University of New Mexico, co-author of a new study on the canyon's age. One camp dated it to a modest 5 million to 6 million years old based on the age of gravel washed down by the early Colorado River, while another group suspected that the western portion of the canyon is much older than that. Hill, along with lead author Victor Polyak and co-author Yemane Asmerom, also of the University of New Mexico, used a recently-improved technique to date mineral deposits in cave formations in one layer of the canyon's rock and arrived at the more ancient age of 16 million to 17 million years old. That's still relatively young considering Earth's 4.5 billion years. The finding is detailed in the March 7 issue of the journal Science. "The importance of our paper is we have an absolute date for the beginning of that, so it pretty much confirms that the whole Grand Canyon is not 6 million years old," Hill told LiveScience. Cave secrets Along the length of the canyon, caves dot a thick layer of sedimentary rock called the Redwall Limestone. In these caves are formations called mammillaries that form when the mineral calcium carbonate precipitates out of the water and deposits on the existing rock walls. What makes these formations helpful in dating the age of the canyon is that they form at the water table. "When you see these things, you know, 'Ah! This is where the water table was,'" Hill said. "We realized from working in the caves there that we could determine the age of the Grand Canyon from these deposits." The researchers used a refined method of charting the radioactive decay of uranium into lead to date deposits along the length of the canyon. After plotting those dates, which show where the water table was at different times, they found a clear decrease in age from the western end of the canyon (near Las Vegas) to the eastern end (near Lake Powell). In fact, the water table in the eastern-most portion of the canyon is at the level of the caves in the Redwall Limestone now. "If you're taking a river trip, you pass the Redwall Limestone in Marble Canyon," Hill said, whereas the caves sit high above the river in the western portions of the canyon. Two sections, connected Based on the geological evidence, Hill and her colleagues concluded that it wasn't the Colorado River that started eroding the canyon's western end. Instead, the job was started by a smaller river, originating from drainage in the immediate area. This river started to cut away the western Grand Canyon when the area just east of where Las Vegas now sits, which geologists call the Basin and Range Province, started to down-drop about 16 million to 17 million years ago. This re-arrangement of the land created a height difference between the Basin and Range Province and the Colorado Plateau, into which the Grand Canyon was carved. Water, of course, tends to flow from higher points to lower ones. "So if you have a higher area, the Colorado Plateau, now going to a lower area, you could have water flowing down to the lower area," Hill explained. Around 6 million years ago, the eastern and western portions of the Grand Canyon connected, allowing the Colorado to flow all the way through, eventually forming the 277-mile (446-kilometer) long and 1-mile (1.6-kilometer) deep canyon that awes us today. In an analysis of the study, also published in this week's issue of Science, geologists Tim Atkinson of the University College London and Mike Leeder of the University of East Anglia in the U.K. said the older age found by Hill and her colleagues wasn't a surprise to many geologists, but that it was the first time this age was firmly established. Hill and her colleagues say that if more mammillary deposits are dated, a more refined timeline of the canyon's development could be made.