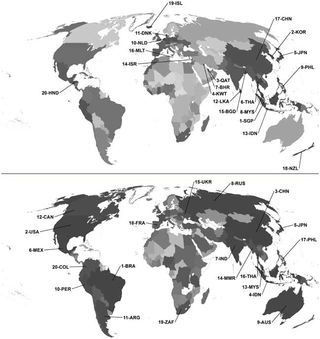 Brazil and the United States rank as the two worst countries in terms of their environmental impact, a new study finds.

The indicators included: natural forest loss, habitat conversion (when natural areas are converted into shopping centers or farmland), fisheries and other marine captures, fertilizer use, water pollution, carbon emissions from land use, and species threat.

Overall, the richer a country, the greater its environmental impact.

"The environmental crises currently gripping the planet are the corollary of excessive human consumption of natural resources," said study leader Corey Bradshaw, of the Environment Institute. "There is considerable and mounting evidence that elevated degradation and loss of habitats and species are compromising ecosystems that sustain the quality of life for billions of people worldwide."

Here's how the two types of rankings came out:

The world’s 10 worst environmental performers (out of 179 considered) according to the proportional environmental impact rank are (with 1 being the worst):

The world’s 10 worst environmental performers (out of 171 considered) in absolute global terms are:

Bradshaw said that the indices used were robust and comprehensive and, unlike other rankings, deliberately avoided including human health and economic data — measuring environmental impact only.

The study, in collaboration with the National University of Singapore and Princeton University, revealed that the total wealth of a country (measured by gross national income) was the most important driver of environmental impact.

"We correlated rankings against three socio-economic variables (human population size, gross national income and governance quality) and found that total wealth was the most important explanatory variable — the richer a country, the greater its average environmental impact," Bradshaw said.

There was no evidence to support the popular idea that environmental degradation plateaus or declines past a certain threshold of per capital wealth (known as the Kuznets curve hypothesis).

"There is a theory that as wealth increases, nations have more access to clean technology and become more environmentally aware so that the environmental impact starts to decline. This wasn't supported," Bradshaw said.

The study and rankings are detailed online in the journal PLoS ONE.