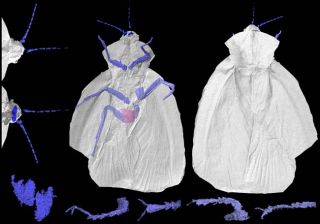 An early ancestor of the cockroach that lived around 300 million years ago has been revealed in a 3-D virtual fossil.

The new 3-D model is derived from a fossilized specimen of Archimylacris eggintoni, which is an ancient ancestor of modern cockroaches, mantises and termites. This insect scuttled around during the Carboniferous period 359 - 299 million years ago, which was a time when life had recently emerged from the oceans to live on land. The fossils of these creatures are normally between 3/4 and 3.5 inches (2 cm and 9) cm in length and approximately 1.5 inches (4 cm) wide.

"The Carboniferous period is sometimes referred to as the age of the cockroach because fossils of Archimylacris eggintoni and its relatives are amongst the most common insects from this time period," said Russell Garwood of the Imperial College London. "They are found all over the world."

The study reveals for the first time how Archimylacris eggintoni's physical traits helped it to thrive on the floor of Earth's early forests.

The researchers created their images using a CT scanning device, based at the Natural History Museum in London, which enabled them to take 3142 x-rays of the fossil and compile the images into an accurate 3-D model, creating a 'virtual fossil' of the creature, using specially designed computer software. The scientists used the models to visualize the Archimylacris eggintoni's legs, antennae, mouth parts and body, which had never been seen by human eyes before.

The bug had sticky structures on its legs called euplantulae that probably enabled it to stick to smooth surfaces such as leaves, which may have helped them to lay their eggs above the ground in safer locations away from predators, Garwood and colleagues figure. There are also claws at the base of its legs, which helped it to climb rough surfaces like trees, so that it could perch above the forest floor for safety or find alternate sources of food higher up.

The legs were at a low angle to the body and fairly long, which likely helped it to move quickly even when the terrain was difficult or uneven.

The scientists also reveal Archimylacris eggintoni's mouthparts, called mandibles, which helped it to grind up its food. The team say the mandibles are similar in appearance to modern-day cockroach mandibles, suggesting they ate similar food, munching on decaying leaf and insect matter as it scurried from place to place.

"We now think this ancient ancestor of the cockroach spent most of the day on the forest floor, living in and eating lots of rotting plant and insect matter, which was probably the bug equivalent of heaven," Garwood said. "We think it could have used its speed to evade predators and its climbing abilities to scale trees and lay eggs on leaves, much in the same way that modern forest cockroaches do today."

The research is detailed in the journal Biology Letters.