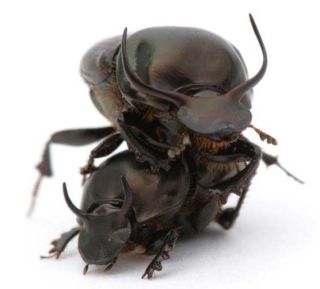 After months of grueling tests, a species of horned dung beetle takes the title for world's strongest insect.

The beetle, called Onthophagus taurus, was found to be able to pull a whopping 1,141 times its own body weight, which is the equivalent of a 150-pound (70 kilogram) person lifting six full double-decker buses. While the study researcher knows of a mite that can take on a hair more, that organism is an arachnid, not an insect.

The finding, published in the current issue of the journal Proceedings of the Royal Society B, does more than elevate the beetle's status, as it lends insight to questions of evolutionary biology.

The beetles aren't the dung-ball-carrying variety, and instead the females bury most of the fecal material (with a little help from males) from, say, cow droppings.

The females build little tunnels where they use the dung to lay their eggs in. It's in this tunnel where mating, and the pre-mating fights between waiting males, takes place. But not all males are equipped for battle, with some sporting horns and others hornless. The no-horn beetles instead wait at the tunnel's entrance, sometimes hiding out in self-built side tunnels, and sneak in to mate before getting caught by a horned male.

The horned males, on the other hand, duke it out head-to-head.

"Their horns kind of meet on the shoulders, and they push each other backward and forward, and the guy being pushed will brace when pushed in the tunnel," Rob Knell from Queen Mary, University of London told LiveScience.

In the study, Knell and Leigh Simmons from the University of Western Australia set up a similar fighting scenario. But first they fed the horned beetles a good diet, poor diet or no food at all.

To test strength, the researchers attached a cotton thread to the rear of each beetle participant, before letting the insect walk into a tiny tunnel created in the lab. Once in the tunnel, the beetle got a tug from the researchers pulling on its little leash. The pulling caused the beetle to brace its legs against the tunnel in a manner similar to that used when fighting.

The beetles with horns, also called major males, that were fed good food got much stronger when fed compared with those not fed. The hornless males on a good-food diet, however, grew much more massive testes without showing the surge in strength.

Here's the likely reason: "The little males don't fight at all, but when they get to mate with a female, they only get to mate with her once," Knell said. "She's also mating with one of the guard males [that guards the tunnel]. So the small male has to invest in testes mass so he can inseminate the female with as much sperm as possible."

The results could help solve an evolutionary puzzle.

Some traits such as strength are under so-called directional selection, in which having that trait means greater fitness and survival. The result should be only those organisms with that trait will survive to pass on the genes responsible for it, evolutionary biologists have thought. But that's not what happens in real life. Instead, there's lots of variability for strength and other traits.

For example, "Out on the savanna someone able to run farther or faster would have higher fitness than someone who didn't," Knell said, adding, "That's pure speculation." But as we know not every human can run a marathon.

Knell suggests that some traits are controlled by a good chunk of the genome rather than just a few genes. That way mutations, or changes to genes that happen randomly over time, would be enough to maintain the genetic variability, he suspects. If that were the case, then Knell says these traits should be regulated by overall health of the animal. And if that were true, Knell would expect that conditions, such as food availability (which can impact overall health) would play a major role in the presence of the traits.

And that's what he found in the study, with better-fed dung beetles with horns beefing up for fights compared with the starved individuals.