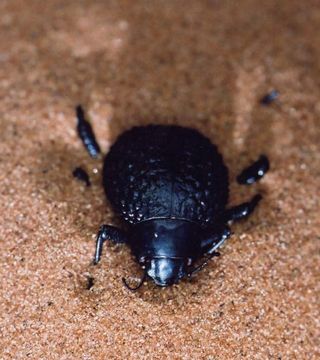 The Namib Desert beetle photographed by University of Oxford researcher Andrew Parker, whose team first worked out in 2001 how the beetle captures water from the air.
(Image: © Andrew Parker via MIT)

When scientists wanted to find the best way to collect water, they looked to the dime-sized Namib Desert beetle.

Engineers from the Massachusetts Institute of Technology have developed some "biomimicry" material after reading about the insect's water-catching tactics in a five-year-old issue of the journal Nature.

Each morning in the harsh African Namib Desert, where it rains less than a half an inch a year, thirsty plants and animals welcome the relief of a light fog that covers the sand dunes. Little droplets from the fog settle on the nubs of the desert beetle's shell. Water-repellent ridges border the bumps, and channel the drops toward the beetle's head.

"That allows small amounts of moisture in the air to start to collect on the tops of the hydrophilic bumps, and it grows into bigger and bigger droplets," said lead researcher Michael Rubner. "When it gets large, it overcomes the pinning force that holds it and rolls down into the beetle's mouth for a fresh drink of water."

Rubner and colleague Robert Cohen applied the same bumpy architecture to create a material out of glass and plastic that collects minute amounts of water, just like the beetle's back.

The research was published in the online last month by the journal Nano Letters.

Scientists could use the sponge-like material to gather water or other substances, to make a so-called lab on a chip, or to build cooling devices, the researchers say.

The U.S. military has expressed interest in using the substance to clean up hazardous spills. The research was funded by the Defense Advanced Research Projects Agency and the National Science Foundation.

"I think this is the factory of the future, or the chemical plant of the future," Cohen said. "I think there could be a lot of [applications] we haven't even thought of yet that might come out of this."