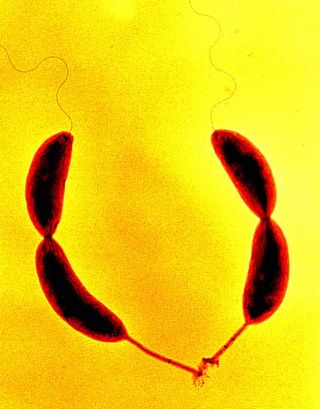 The bacterium Caulobacter crescentus uses the toughest glue on Earth to stick to river rocks, and now scientists are trying to figure out how to produce the stuff.

The adhesive can withstand an enormous amount of stress, equal to the force felt by a quarter with more than three cars piled on top of it. That’s two to three times more force than the best retail glues can handle.

The single-celled bacterium uses sugar molecules to stay put in rivers, streams, and water pipes, a new study found. It’s not clear how the glue actually works, however, but researchers presume some special proteins must be attached to the sugars.

"There are obvious applications since this adhesive works on wet surfaces," said study leader Yves Brun, an Indiana University bacteriologist. "One possibility would be as a biodegradable surgical adhesive."

Engineers could use the superior stickum too, Brun and colleagues say.

But making it has proved challenging. Like a mess of chewing gum, the gunk globs to everything, including the tools used to create it.

"We tried washing the glue off," Brun said. "It didn't work."

The research, announced by the university Friday, will be detailed in the April 11 issue of the journal Proceedings of the National Academy of Sciences.