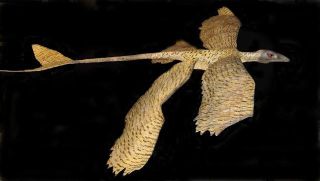 Scientists created a plastic model of a microraptor to show its gliding capabilities.
(Image: © University of Kansas)

Whether birds first evolved flight as ground dwellers or took to the skies from trees has been a longstanding debate.

A new study of an ancient four-legged creature called Microraptor gui, poised on the boundary between dinosaurs and birds, suggests that the arboreal, or tree-living, idea may be correct.

Microraptor lived about 120 million years ago, and is thought to be an early ancestor of modern birds. It had bird-like feathers that appear to have been used for flight, but a dinosaur-like head with sharp teeth and scales.

One of its most confusing features is its hind legs, which had 7-inch (18-cm) long feathers extending from them. While some scientists say Microraptor could have used these feet to walk around, the leaders of a new study say these feathers would have made walking nearly impossible.

"With those big flight feathers on its feet, I can hardly figure out how it could even have maneuvered on the ground at all, because with its legs extended the feathers would have extended too, and they would have been a serious impediment," said David Alexander of the University of Kansas, who led the study.

Next, Alexander and his colleagues, from the University of Kansas and Northeastern University in China, wanted to solve a mystery about whether the creature used its hind legs for flying. So they built a three-dimensional plastic replica of the animal based on casts of a Microraptor skeleton and the preserved impressions of feathers from specimens in Chinese museums. They tested their model's movements, and found that its hips rotated in a way that would have allowed it to extend its hind legs to the side for flight.

"The controversy was that these animals couldn't spread their hind wings to glide," said co-researcher David Burnham, also of the University of Kansas. "But we've been able to articulate the bones in their hip socket to show that they could fly."

Alexander said the tests convinced him that the animal couldn't have run on the ground, but it could have flown.

"It probably would have only come to the ground in emergencies," Alexander told LiveScience. "I'm not sure that [everyone] will be completely convinced, but for me the evidence is pretty ironclad."

The researchers published their findings in the Jan. 25 issue of the journal Proceedings of the National Academy of Sciences.