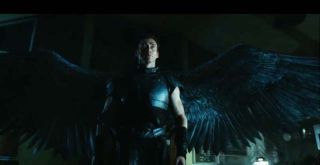 The new film "Legion" is about the final days of mankind, as a group of angels make a last stand in a small diner in New Mexico to protect a woman pregnant with humanity's new savior.

The archangel Michael is played by Paul Bettany, who portrays Charles Darwin in the new film "Creation," also released this Friday. The film poster shows Michael with a hunting knife in one hand and a machine gun in the other. This ain't your grandmother's angel.

The Biblical angels were tall, slender males with soft features, often dressed in flowing robes which have been specially tailored around their large white wings. Unlike Michael in "Legion," they had no tattoos.

Despite centuries of theological speculation about angels — from their hierarchies to how many can dance on the head of a pin — no one knows if they exist. Many people believe they do: Polls suggest that nearly 70 percent of Americans think angels exist, and 32 percent claim they have personally felt an angelic presence.

In the Bible the main function of angels was as God's messengers (mostly announcing births and deaths), but in modern times they function more as guardians. In fact, the word angel has been generalized to describe any hero or benefactor, from a firefighter to charity donor.

Angels are said to appear to people in times of need; other times they are sensed as comforting but unseen presences. In real-life reported encounters, however, angels adopt any form. Sometimes the angels are said to take the form of sunlight. In one story that aired on the "Today Show" in December 2008, a North Carolina woman named Colleen Banton claimed that she saw an angel that miraculously healed her daughter. While in a hospital's waiting area, Banton noticed that a patch of sunlight appeared through a nearby window and shone in the hallway outside her daughter's room. Her daughter soon got better, and Bannon attributed the recovery to the angelic visit.

Though angels are said to dwell in heaven, their visits to the earthly realm are not always benevolent. Biblical angels not only comfort and heal; they also wage warfare, lay siege to cities, and kill people. The archangel Michael, for example, is often depicted as the leader of God's Army, destroying armies with his terrible powers and flaming sword.

The most famous angel, of course, is Satan, who rebelled against God and was cast out of heaven. Satan started his own outfit just across the river Styx, according to Greek mythology, and has been doing well ever since.

Perhaps significantly, the title of the film, "Legion," is not the name of an angel but instead a demon. The New Testament gospels of Mark and Luke tell the story of Jesus encountering a man who had been possessed by demons: “And [Jesus] asked him, ‘What is thy name?’ And he answered, saying, ‘My name is Legion: for we are many’” (Mark 5:9, KJV).