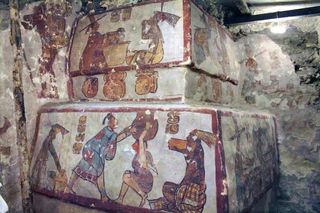 One corner of the painted Maya pyramid structure at Calakmul, Mexico. One layer of the mural must still be excavated.
(Image: © Carrasco Vargas et al./PNAS)

The murals were uncovered during the excavation of a pyramid mound structure at the ancient Maya site of Calakmul, Mexico (near the border with Guatemala) and are described in the Nov. 9 issue of the journal Proceedings of the National Academy of Sciences.

The find "was a total shock," said Simon Martin of the University of Pennsylvania Museum in Philadelphia, who studied the paintings and hieroglyphs depicted in the murals.

The Maya have been studied for more than a century, but "this is the first time that we've seen anything like this," Martin said.

The Maya, like many other societies, left more traces and accounts of the lives of the ruling classes — the royalty, religious orders and artisans — than of the lower orders of society that made up the bulk of such civilizations.

"We almost never get a view of what other layers of society are doing or what they look like, so this is one of the things that makes [the murals] so special," Martin told LiveScience.

The murals were found on the walls of one layer of the mound structure — Maya built over the top of older structures, creating buildings in layers like onions, Martin explained. While other layers were scraped up and destroyed in the effort to build over them, the layer with the murals appears to have been carefully preserved, with a layer of clay put over the murals, ostensibly to protect them.

This careful preservation "might suggest that it was something pretty special," Martin said.

The images on the mural show people engaged in mundane activities, such as preparing food. Hieroglyphic captions accompany each image, labeling each individual. In each case the term "aj," meaning "person," is used and followed by the word for a foodstuff or material. For example, the terms "aj ul" ("maize-gruel person") shows a man with a large pot, dish and spoon with another man drinking from a bowl, and the term "aj mahy" (tobacco person) depicts two men, one holding a spatula and the other a pot that likely holds a form of the tobacco leaf.

Such scenes have never been seen in surviving Mayan paintings before, though some parts of quotidian Mayan culture have survived through the ages with the remaining Mayan populations) and the hieroglyphs for some words (such as "tobacco" and "maize-gruel") were already known. Other hieroglyphs, though, were new to researchers — of particular importance were finding the words for maize itself and salt, which were known to be key staples of the Mayan diet.

Whether or not any other such murals are hidden in mounds in the jungles of Central America isn't known, but Martin and other archaeologists say that, chances are, any such paintings that did exist are likely long one.

"Tremendous amounts of Maya culture and writing have just perished," Martin said. "It's not like Egypt, where even bits of paper in the sand can survive 5,000 years; this is an extremely hostile environment, it's extremely humid."

Martin and his colleagues are not yet sure what the structure was or why the mural was painted and preserved. But they hope to learn more as they continue to excavate more layers of the pyramid and uncover more of the mural.