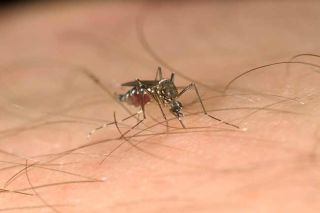 WASHINGTON (ISNS) -- As mosquito populations boom this summer, hikers and backyard partygoers are faced with more insect repellent choices than ever before.

Entomologist Daniel Strickman of the U.S. Department of Agriculture offered his own recommendations for the public last week at a meeting of the American Chemical Society in Washington, D.C.

He said that more products once used only in Europe have made their way onto the U.S. market, but that the industry as a whole has yet to see a breakthrough repellent that is significantly more effective than the traditional bug sprays that have been used for the past 50 years.

Laboratories around the world are exploring new ways to develop these new insect repellents. A team of scientists from the USDA recently used a sophisticated computer program to analyze thousands of potential chemical structures and pick out one that repels mosquitoes three times longer than today's sprays -- though they have yet to test its safety and effectiveness on human skin.

A report in the scientific journal Nature on Wednesday identified a promising substance found in ripe bananas. It interferes with the brain cells that cause mosquitoes to be attracted to the carbon dioxide in human breath.

Experimental compounds like these are still years away from commercial development and the $200 million consumer pesticide market.

The most common active ingredient in bug sprays is DEET, a chemical developed and tested in the 1940s and 50s by the U.S. Army. Effective against mosquitoes and other pests for hours after application, it is the only insect repellent stockpiled for use by the armed forces.

According to Lt. Cmdr. Jeff Stancil of the Armed Forces Pest Management Board, many soldiers refuse to use it. "Anecdotally, I've noticed that compliance is low," he said.

Like civilians, the soldiers are bothered by the smell of DEET and by questions about its safety. Though the Environmental Protection Agency re-approved the use of DEET in 1998 after an extensive safety review, new data suggests that the substance may affect our cells in unintended ways. One recent study found that DEET can interfere with the activity of enzymes important for the nervous system -- especially when combined with other chemicals.

"DEET gets a lot of bad press," said Strickman. He recommended a couple of recently-developed alternatives.

One of the newest arrivals on the shelf is Picaridin, a substance derived from pepper that is popular in Europe and Australia. Studies by its manufacturer suggest that Picaridin lasts for 2 to 8 hours and is just as effective as DEET but less oily.

"People seem to like the odor better," said Strickman. "It's slightly more fruity."

Available in Europe for 20 years, the chemical IR3535 has also been growing in popularity since its approval in the U.S. about a decade ago. Numerous studies have confirmed the effectiveness of IR3535, the active ingredient of Avon's Skin So Soft, though the duration of its protection varies from study to study -- from as little as 6 minutes when tested in the 1970s to as long as 10 hours for new formulations.

A formulation that consists of 20 percent IR3535 is "very effective," said Strickman. "It's the only repellent active ingredient that has never caused an adverse effect."

When preparing for an outdoor party, Strickman recommended that consumers stay away from citronella candles. "No one has really come up with a candle that actually works, but people love them," he said.

Misting systems, which release an aerosol spray into the air every 10 to 15 minutes, are even worse, Strickman said. These devices use substances like pyrethrins and cedar oil, which are controversial because of their potential effects on the environment and the possible carcinogens they contain. "These are not encouraged," he said. "They basically turn your entire backyard into an aerosol can."

Strickman recommended Bonide's Mosquito Beater, a chemical treatment sprayed outdoors in a single burst. "It works quite well, but it's expensive and messy," he said. "Using it to prepare for an outdoor party would work quite well."

S.C. Johnson, which owns the OFF! line of repellents, is selling a new personal clip-on device that releases an odorless chemical -- called metofluthrin -- into the air around the wearer. "It probably works well as long as the person is not moving and there is no wind," said Strickman.

Strickman also suggested keeping an eye out for new products under development, including ultra-low volume repellents and plant-based repellents.

The next big step for the bug spray business, he said, is to significantly improve how long the protection of a repellent lasts.

"Unfortunately, most of the improvement we see in the duration of a repellent are low percentage in duration," said Strickman. "We're not really going to be excited until we see two, three, or four times improvement."