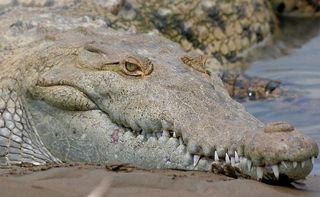 Crocodiles, and their cousins, alligators, were shown to be less diversified than certain groups of mammals, birds and fish.
(Image: © Michael Alfaro)

Mammals, birds and fish are among evolution’s "winners," while crocodiles and other reptiles have ended up on the losing end, a new study suggests.

The research allowed scientists to calculate for the first time which animal lineages have exceptional rates of success. The so-called "winners" have more species in their group, which means they have successfully evolved and diversified into many types of environments. The losers have diversified less, even over the course of millions of years.

The distinction doesn't imply that the losers are under a greater threat of extinction, however.  Even rich, diverse lineages include endangered species.

To separate the winners from the losers, a group of scientists analyzed DNA sequences and fossils from 47 major vertebrate groups, and used a computational approach to calculate whether the species richness (a way of measuring biodiversity) of each of these 47 groups is exceptionally high or low.

The winners: most modern birds, including the songbirds, parrots, doves, eagles, hummingbirds and pigeons; most mammals; and a group of fish including most of the fish that live on coral reefs.

The losers: crocodiles and alligators and a reptile cousin of snakes and lizards known as the tuatara.

The winners showed remarkable species richness, especially for the relatively short time some groups have been on the planet.

The research was funded by the National Science Foundation.

A group of many mammals, with the scientific name of Boreoeutheria, has diversified about seven times faster than scientists expected, beginning about 110 million years ago, Alfaro and his colleagues calculated. The group includes primates and carnivores, as well as bats and rodents.

The losers, on the other hand, have changed little during their long residence on Earth.

Crocodiles and alligators are nearly 250 million years old, Alfaro said, yet have diversified into only 23 species. They are diversifying a staggering 1,000 times slower than the scientists expected.

"Their species richness is so low, given how old they are," Alfaro said.

The tuatara, which lives in New Zealand and resembles a lizard (though the two groups are actually distant cousins), has only two species.

"In the same period of time that produced more than 8,000 species of snakes and lizards, there were only two species of tuatara," Alfaro said.

"It’s a real mystery to biologists how there can be any tuataras given their low rate of speciation," he added. "They must have something working for them that has allowed them to persist. In species richness, these are losers, but in another sense, this highlights how unique they are."

The findings, detailed in the July 24 online early edition of the journal Proceedings of the National Academy of Sciences, don't match up with traditional scientific explanations for why there are so many mammals, birds and fish.

"The timing of the rate increases does not correspond to the appearance of key characteristics that have been invoked to explain the evolutionary success of these groups, such as hair on mammals or mammals’ well-coordinated chewing ability or feathers on birds," Alfaro said. "Our results suggest that something more recent is the cause of the biodiversity. It may be that something more subtle explains the evolutionary success of mammals, birds and fish. We need to look for new explanations."