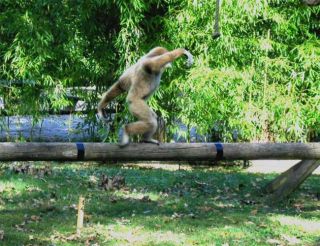 A juvenile white-handed gibbon walks along a pole in the Wild Animal Park Planckendael, Belgium.
(Image: © Evie Vereecke/University of Liverpool.)

Our ape-like ancestors might have walked like today’s gibbons, whose super bendy feet give them a floppy strut.

The modern human foot first evolved in our ancestors around 1.8 million years ago, said Evie Vereecke of the University of Liverpool in England. But studies suggest that even before our advanced feet emerged, our mostly tree-climbing ancestors were walking upright for short stints.

Vereecke wanted to find out how they would have done that without specialized walking feet.

She turned to gibbons. This family of primates shares a common ancestor with the great apes (chimps, gorillas, orangutans and humans). Gibbons walk upright up to 12 percent of the time, Vereecke said.

Like other modern apes, gibbons sport a flexible joint midway along the foot. While we still have the joint, we don't have the flexibility that gibbons and other apes have. That flexibility is essential for climbing trees and grasping onto branches, but perhaps not for ambling around on flat surfaces.

Vereecke videotaped gibbons walking about at Belgium's Wild Animal Park of Planckendael. She then digitized the animals' foot movements and developed a computer model, which showed the animals moved sort of like ballerinas, landing on their toes before the heel touched the ground. This allowed the animals to stretch the toes' tendons and store energy in them.

Once their toes touched down, gibbons then lifted the heel first, effectively bending the foot to form an upward-turned arch. That bending maneuver stretched the toes' tendons even more, storing more elastic energy for use as the foot eventually pushed off the ground.

Unlike gibbons' flat feet, we have arched feet with an elastic band along the sole. When we put weight on our feet, the arch stretches that band, storing elastic energy. At push off, the elastic band recoils, releasing energy for propulsion at the end of the stride.

In essence, our feet go from an arched or upside-down "U" shape to flat when walking, while gibbons' feet change from flat to "U" shaped.

"This gibbon research shows us that even if you have these flat, flexible feet, you can walk upright quite efficiently," Vereecke told LiveScience, "and that it doesn't restrict or limit your abilities even though you don't have this specialized foot structure as modern humans."

But gibbons could still shed light on how early humans walked. "We have some fossil remains of hominin feet, and those indicate that our early ancestors had floppy, flexible feet," Vereecke said. "Although they didn't look like a gibbon, they likely had flexible feet and walked upright."

The research is detailed in the Nov. 14 issue of the Journal of Experimental Biology.