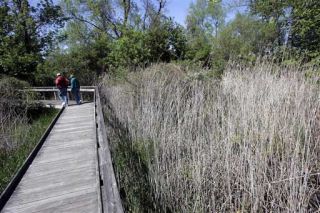 A couple walks past last year's growth of Phragmites, also known as "Giant Reed," in this Sunday, May 13, 2007 file photo, at Maumee Bay State Park in Oregon, Ohio. Invasive bamboo-like plants that grow taller than adults have choked out native plants in a marsh that once teemed with life along Lake Erie.
(Image: © AP Photo/J.D. Pooley, FILE)

Many studies have shown that invasive plant species are taking over in regions large and small around the world, a problem often instigated and fueled by what humans plant or otherwise accidentally introduce into an area. A new study finds that insects play a role in helping weeds to win.

In addition to being physically overpowered by invasive weeds, native plants continue to be devoured by the local bugs that are used to them, the research reveals. Nonnative weeds, on the other hand, often are not as appealing to local insects.

Meanwhile, bugs give the weeds a reproductive boost.

"Some weed species receive all of the benefits of visiting pollinators but none of the negative consequences of herbivores," said study leader Eve White of the Queensland University of Technology in Australia. "While many plants need insects to reproduce, there are many insects that simply feed off plants and this is having an effect on natives."

White's research, in the lab as well as in multiple, natural Australian settings, found herbivorous insects—those that eat plants—prefer to munch on native greenery. Further, pollinators sometimes create hybrid species that are a mix of an invasive plant and a native plant. But the hybrids tend to be of ill health and their seeds often don't mature and reproduce.

"The reproductive effort is therefore being wasted," White explained. "Essentially it may give weeds the upper hand over native plants."

Separate research has suggested that weeds cost more than $500 billion annually worldwide, largely due to crop losses and eradication efforts.