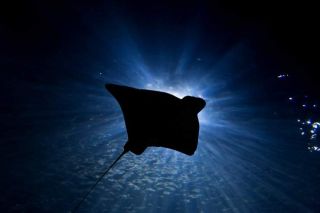 A stingray from below.
(Image: © Mark Aplet, Dreamstime.com)

Stingrays like the one that killed "Crocodile Hunter" Steve Irwin are cousins of sharks. But unlike some sharks, which are fearsome predators with powerful jaws, the stingray is rarely a threat to humans and its small mouth is no threat at all.

The tail of the stingray that killed Irwin is capped with a roughly 8-inch spear made of the same stuff that makes up shark scales, known as dermal denticles. The spear, which stiffens when the stingray feels threatened, is serrated like a steak knife and packs a venom that can be deadly to predators.

((ImgTag||right|null|null|null|false)) The tip of a stingray's tail is serrated like a steak knife.

"The venom itself is a largely protein-based toxin that causes great pain in mammals and may also alter heart rate and respiration," according to the Mote Marine Laboratory.

"Stingrays do not attack people, however if it is stepped on, the stingray will utilize its spine as a form of defense," according to Nancy Passarelli and Andrew Piercy of Florida Museum of Natural History. "Although being pierced by the stingray’s spine is painful, it is rarely life threatening to humans."

There are about 200 species of stingrays. They live in both freshwater and in the oceans. Many do not have the ability to sting.

A stingray's mouth is on the underside of its flat body, so that it can feed on worms, crustaceans and other creatures on the seafloor. Its teeth are used to crack shells of prey.

Stingray spines have been used by coastal tribes to create spears and arrowheads, according to the Miami Museum of Science.

Irwin was likely killed not by the sting so much as the fact that the stingray's spear pierced his heart and caused him to bleed to death, according to news reports.