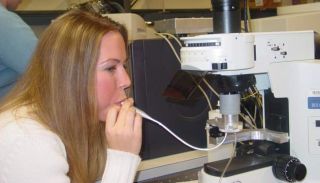 Rachel Bukowski, a doctoral student in chemistry working on the research, breathing into a demonstration machine.
(Image: © University at Buffalo)

Scientists are developing a super-sensitive Breathalyzer-type tool that works a lot like a nose and could one day sniff out human ills.

Rather than detecting blood-alcohol levels—or garlic and onions—the device would identify diseases by sensing chemical patterns carried in the breath. Researchers have linked some of these patterns, known as biomarkers, to diseases as diverse as diabetes, AIDS, and schizophrenia.

Previous disease-smelling systems have been big and difficult to use and had limited capability.

"We're making a small, inexpensive, and robust device to assess the same things, anywhere. It could work in the field, at the mall, in the parking lot, and at home," said Frank Bright, a chemist from the University at Buffalo.

While it's not clear whether the devices would be needed in parking lots, the technology is remarkable.

The electronic olfactory system, which looks nothing like a nose, will be made up of sensors similar to receptors in our nasal passages. These sensors will be triggered by molecules floating in the air. When a patient breathes into the device, different molecules will trigger a different set of sensors to light up. Bright and his research team can train the device, which is made of artificial neurons mimicking a brain, to connect the pattern of lights with particular diseases.

Scientists will start the training by comparing samples of patients already diagnosed with cancer. They'll search for similar patterns in the patients' breath, so that in the future, when the device sees those patterns, it recognizes cancer.

The training will also involve teaching the machine to ignore everyday smells like Listerine, cheeseburgers and breath mints.

Other disease sniffers have had only about 30 sensors. So far, Bright's team has engineered about a 100 different sensors, which match up to all kinds of molecules. Their goal is to produce a million.

"The ability to create a library with more than a million different sensors is pretty remarkable," Bright told LiveScience.

He said prototypes should be available about a year from now.

The device's portability, speed and cheap price tag should help doctors diagnose diseases early. It could particularly improve the health of the elderly and impoverished, people who often don't have access to routine health care, Bright said. As well, doctors could use it to filter out possible diagnoses and cut down on costly medical tests.