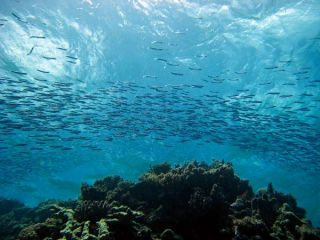 Although Australia's massive Great Barrier Reef is home to a dazzling array of marine life, its smaller and more remote regions are less crowded and less diverse. A new study from the Australian Institute of Marine Science (AIMS) and Australia's University of Adelaide reveals this kind of small-town living is dangerous for the local fish populations.

Professor Corey Bradshaw, director of Ecological Modeling at the University of Adelaide, said the first problem is that far-flung reefs, like many along the 1,600-mile (2,600-kilometer) stretch of the Great Barrier Reef, are less likely to receive visitors. In the fish world, immigration is key.

"We even have a name for it—the 'Rescue Effect,'" Bradshaw told OurAmazingPlanet. "If you're isolated you're less likely to have a fish find you, because you're far away."

"If they get hit by something — let's say there's a bleaching event and all the coral dies, and then a cyclone hits — if there's a small population, it's far more likely to be wiped out," Bradshaw said.

In addition, low immigration means a lack of diversity, which itself poses a real threat to survival. Bradshaw likened a reef's rich mix of species to a healthy investment portfolio; the safest bet is to maintain a variety of stocks.

"A diverse system with lots of species keeps the overall system from collapsing," he said.

This new research has far-reaching implications for reefs facing crisis because of climate change.

"Our research suggests that conservation resources might be better allocated to the protection of large, connected habitats," said Dr. Camille Mellin, a Postdoctoral fellow from AIMS and the University of Adelaide's Environment Institute, and leader of the project.

The study's authors, using data collected over the last 15 years, produced a mapping tool that can be used for reefs all over the world. An "index of susceptibility," as Bradshaw called it, the map allows researchers to perform triage on the reefs, and predict which might stay alive.

"It's cutting your losses," Bradshaw said. "If we're going to lose reefs anyway, the ones we should be trying to protect are the reefs that are most likely to survive."