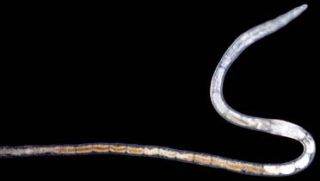 The new species of Grania discovered off the Gullmarsfjord in Scandinavia.
(Image: © Pierre De Wit)

Four newly identified worm species, including one that sports an unusual green color, have been found wriggling in the sands of the Great Barrier Reef.

The layer of sand that covers the floors of the Earth's oceans is actually home to a large diversity of marine organisms. Enterprising animals can take advantage of the water-filled spaces between sand grains.

The newfound creepy crawlies are members of the genus Grania, a group of worms found in marine sands throughout the world, from the tidal shore down to the deep ocean. Worms that belong to Grania, part of the class of annelid worms Clitellata, are typically about 0.8 inches long (2 centimeters) and mostly white in color.

Zoologist Pierre De Wit, of the University of Gothenburg in Sweden, found the four worm species while sieving samples of sand collected from Australia's Great Barrier Reef. One of the four, dubbed Grania colorata, is green, instead of the usual white.

"These worms are usually colorless or white, and we have not been able to work out why this particular species is green," De Wit said.

De Wit also found a previously unknown member of the Grania family in Scandinavia. The species, Grania occulta, was thought to be part of a known Grania species, but DNA analyses suggested otherwise.

"Species that were previously regarded as the same may prove to have a completely different function in the ecosystem, and have different tolerance of environmental toxins, for example. It is obviously important to know this in order to be able to take the right action to protect our fauna," De Wit said.

There are currently 71 species that have been described in the Grania genus. The new species are described in De Wit's Ph.D. thesis.