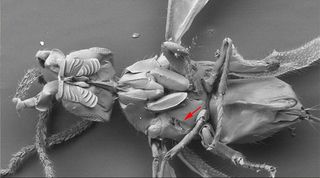 This fig wasp is dated to 34 million years ago. The pocket where the pollen is stored has been arrowed. Copyright: Natural History Museum, London.

The world's oldest known example of a fig wasp has been identified from the Isle of Wight. Dating back 34 million years, the fossil wasp looks almost identical to the modern species, suggesting the specialized insect has remained virtually unchanged for at least that long.

When discovered in the 1920s on the largest island of England, the fossils had been wrongly identified as belonging to an ant. New analyses of the fig wasp specimens suggest instead they belong to a fig wasp.

"We believe from molecular evidence that fig wasps and fig trees have been evolving together for over 60 million years," said Steve Compton, a fig wasp expert at the University of Leeds in England. "Now we have fossil confirmation that gets us a bit closer to that date. Although we often think of the world as constantly changing, what this fossil gives us is an example of something remaining unchanged for tens of millions of years."

Fig wasps are tiny insects — measuring just 0.06 inches (1.5 millimeters) in length — that breed exclusively within figs. In return for the breeding spot, the wasps each pollinate one of the 800 ore so modern tree species while ignoring the other fig trees. The flowers, where the pollination occurs, are completely concealed within the fig. The wasps have developed a particular body shape and features so they can crawl into figs to reach the flowers.

The larvae of fig wasps fare best if they feed within a pollinated flower, and so the most highly developed species of wasps actively pollinate the figs before laying their eggs, rather than passively spreading pollen as they move between trees. The wasps collect pollen in pockets on the underside of their bodies and then take it to another tree, where they pull it out and spread it on the flowers before laying their eggs.

Compton and his colleagues used high-tech microscopy techniques to compare the ancient wasp fossils with modern fig wasps and with a specimen of a fig wasp encased in Dominican amber dated to 20 million years ago. Both fossil insects showed the same body shape and features as the modern species, they found.

The team also found pollen pockets on the underside of the fossil wasp and the wasp trapped in amber and identified grains of fig pollen within those pockets.

"What makes this fossil fascinating is not just its age, but that it is so similar to the modern species," Compton said. "This means that the complex relationship that exists today between the fig wasps and their host trees developed more than 34 million years ago and has remained unchanged since then."

A cheating tactic used by modern trees today seems to have already been in play years ago as well. The edible figs we eat are produced on specialized female plants that trick the wasps into entering the figs and strip off their wings, but then prevent them from laying any eggs. As a result, the figs produce only seeds and no wasp offspring. The length of the organ the wasp uses to lay its eggs (called the ovipositor) on the Isle of Wight fig wasp suggests its host fig tree had already evolved this method of cheating on its insect partner.

The research will be published online this week in the journal Biology Letters.