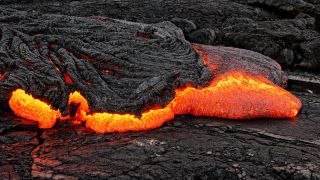 A blob of magma entombed in a bubble smaller than the width of a human hair and found in South Africa may turn back the clock on Earth's first slow dance of the rocky slabs that make up its outer shell.

The chemicals inside that little blob suggest so-called plate tectonics revved up during the first billion years of Earth's existence.

Since the 1950s, scientists have known Earth's crust is made of giant slabs called tectonic plates that float above Earth's molten mantle. These colossal plates meet in subduction zones, where the lighter slab slides under the heavier one into the depths of the mantle. The sinking crust, infused with minerals collected from Earth's surface, melts into magma under the extreme pressures and temperatures of Earth's interior. [In Photos: Ocean Hidden Beneath Earth's Surface]

When exactly this planetary recycling began has been hotly debated. Estimates range from 1 billion to 4 billion years ago. Now, an international team of scientists has discovered that the subduction of Earth's crust likely began more than 3.5 billion years ago. Their results were published July 15 in the journal Nature.

"Plate tectonics may be the main process on Earth that makes it different from other planets in our solar system and that may be quite significant for the study of life on Earth," said Alexander Sobolev, lead author of the paper and a geochemist at Université Grenoble Alpes in France.

The microscopic bead of cooled magma at the root of their discovery laid dormant for more than 3.3 billion years, protected by its olivine crystal tomb and unaltered by its surrounding environment. It was a time capsule from one of the earliest eons in Earth's history.

The olivine crystal, no bigger than a grain of sand, was found in a komatiite rock, named after the Komati River in South Africa where such rocks were discovered. They formed when extraordinarily hot plumes of magma rose from the mantle to Earth's surface (once magma reaches Earth's surface, it's called lava) during the Archaean period (2.5 billion to 4 billion years ago). These rare rocks are exceptionally precious to geologists because they give a glimpse into the early conditions of Earth's mantle.

To study the tiny magma inclusion, Sobolev and his team remelted the ovaline crystals by heating them to more than 2,700 degrees Fahrenheit (1,500 degrees Celsius) and rapidly cooling them in ice water to form a glassy sample. They then used state-of-the-art instruments to measure the chemical makeup of the glassy magma and determine its origin.

The researchers discovered the magma contained a number of signatures of subducted oceanic crust, including high concentrations of water and chlorine, and low levels of deuterium (a heavy version of hydrogen). They concluded the magma originated in the melted remains of an ancient ocean seafloor.

"If that is the case, it means a lot," Sobolev said. "It means that seawater-altered crust from the surface went down into the mantle nearly 3.3 billion years ago. Because all these processes are slow, you can expect that from the point from when this source went down to the point where it reached the surface again, it took at least 100 to 200 million years. That means this process started within the first billion years of Earth's history."