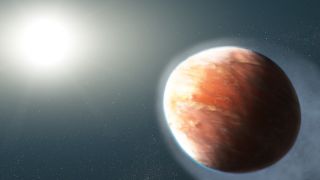 Scientists have discovered a football-shaped planet, known as WASP121-b. The planet circles a star brighter and hotter than the sun, at such close distances that the planet is almost torn apart by gravitational tidal forces.
(Image: © NASA, ESA, and J. Olmsted (STScI))

Nine-hundred light-years from Earth, there's a football-shaped planet so hot that heavy metals boil through its atmosphere, venting into space.

The planet, called WASP-121b, is about 10 times hotter than any other known exoplanet, due to its proximity to its host star, which is hotter than the sun. This proximity also gives the planet its unique shape, because gravitational tidal forces in its atmosphere elongate the whole planet.

WASP121-b falls into a category astronomers call "hot Jupiters," because it is roughly the same size as the largest planet in our solar system. The exoplanet is 12% to 24% heavier than Jupiter, but the heat that WASP121-b absorbs from its sun puffs up the planet to a radius of about 70% wider than Jupiter's.

When researchers analyzed the light filtering through the exoplanet's atmosphere as the planet passed between its host star and Earth, they saw evidence of iron and magnesium high above the planet's surface — so high that those heavy molecules would escape the planet's gravity and drift off into space. That puts WASP-121b in a class all its own. There are other planets hot enough to boil iron and magnesium at the planetary surface, but once in the atmosphere, gravity and cooler environs conspire to condense those elements into clouds. This first-of-its-kind discovery reveals a new category of ultrahot exoplanet, one so thoroughly cooked that your cast-iron skillet would bubble, turn to gas and boil out of the atmosphere.

"Heavy metals have been seen in other hot Jupiters before, but only in the lower atmosphere," lead researcher David Sing of Johns Hopkins University said in a statement. "So you don't know if they are escaping or not. With WASP-121b, we see magnesium and iron gas so far away from the planet that they're not gravitationally bound." [15 Amazing Images of Stars]

The researchers already knew WASP-121b was among the most extreme exoplanets ever discovered, so on two separate occasions, they aimed the Hubble Space Telescope at the planet as it passed in front of its star, to see how ultraviolet (UV) light interacted with the planet's atmosphere.

Not only did they find first-of-their-kind signatures of venting heavy metals, the researchers got a better sense for why the planet's upper atmosphere is so darn hot.

Other planets' upper atmospheres admit lots of UV radiation. But the heavy metals in WASP-121b's outer reachers absorb those UV rays, converting all that energy into heat. So while Earth, if it orbited WASP-121b's host star at such a close distance, might see the most extreme effects in a scorched surface (though its upper atmosphere would also likely get blasted away) WASP-121b's upper atmosphere takes a pounding and just keeps on cooking.