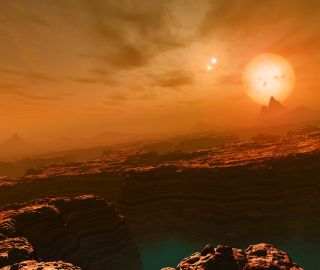 Astronomers have discovered a planet in our galactic neighborhood that has three red suns.

LTT 1445Ab, a rocky world a bit bigger than Earth, zips in a tight orbit around the biggest star in a triple-star system just 22.5 light-years from Earth, "transiting" between Earth and its host star on each pass. The stars in the system are M dwarfs — reddish, active stars smaller than our sun — that whirl around each other in a complex dance. That makes LTT 1445Ab the second-closest known transiting exoplanet to Earth, and the closest one orbiting an M dwarf. (Other non-transiting exoplanets may exist even closer to Earth, but they're more difficult to study.)

Standing on the surface of the planet, which orbits its star at just one-tenth the distance between the sun and Mercury, "you'd see one big orange sun and two much smaller orangey-red suns in the distance," said Jennifer Winters, lead author on the study and an astronomer at the Harvard-Smithsonian Center for Astrophysics. "The primary star would look really big in the sky. It's really close. The other two are much farther away. They'd look about 100 times brighter than Venus, and about the same … size in the sky."

We don't know exactly when or how these different suns would rise on the planet, because from this distance astronomers can't see at what angle or speed it's spinning.

Of course, all of that is true as of 2019. But as the three stars drift closer together and farther apart over the course of their orbits — orbits that scientists have studied for decades without ever noticing the exoplanet — that picture of the sky could change. [15 Amazing Images of Stars]

"The reason we probably haven't found [the exoplanet] before is because it's in this triple system, and a lot of these planet-search surveys avoid these kinds of systems," Winters said.

Past studies of the three-star system didn't look for signs of an exoplanet, and exoplanet hunts rarely look at multiple-star systems.

That's because researchers detect transiting exoplanets by watching for flickers in the starlight as the planet passes between its host star and Earth. But having other stars in the same system can "contaminate" those delicate measurements, Winters told Live Science. Extra light from the extra stars can get mixed into the data. The studies scientists undertake to determine the mass, size and position of exoplanets rely on careful measurements of motion in the system; triple systems just move in more complicated ways.

Winters and her colleagues were able to figure out the puzzle of LTT 1445Ab using data from the Transiting Exoplanet Survey Satellite (TESS), NASA's next-generation exoplanet-hunter that launched in 2018. This system was particularly interesting to her, she said, because of her research interest in M dwarfs — a group of stars that, until recently, haven't been the focus of much exoplanet research.

M dwarfs, Winters said, go through a long "adolescence" period during which they are very active and emit a large amount of radiation. [9 Most Intriguing Earth-Like Planets]

"We don't know yet if planets' atmospheres are able to survive the high-radiation environment of an M dwarf when it's really young, so this is going to be an amazing opportunity to study that," she said. "As it passes in front of its host star, it's backlit by the light from its host star and we can study… the types of molecules that are in its atmosphere – if it has an atmosphere."

Live Science asked whether the planet would ever jump over to one of the other stars in its system and orbit it for a while, but Winters said such a scenario is unlikely. Past theoretical research has shown that exoplanets closer than one-third the distance between their host star and other stars in their systems probably have very stable orbits. And this planet is well within that stability zone. Still, Winters added, this is a very new discovery, and it's difficult to know what the exoplanet's past or future holds.

Winters and her colleagues' paper has not yet been published in a peer-reviewed journal, but is available as a preprint on the server arXiv.