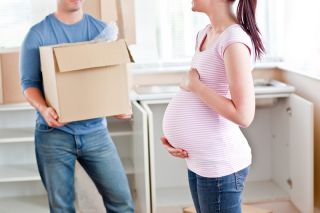 When a baby's on the way, pregnant women and their families may consider moving to a new home in search of more space or a better location. But a new study suggests that, in some cases, moving during pregnancy may raise the risk of preterm birth.

The study researchers analyzed data from more than 100,000 pregnant women in Washington state. The investigators found that women who moved during the first trimester of their pregnancy were 42% more likely to give birth prematurely (before 37 weeks of pregnancy) and 37% more likely to have a baby with a lower-than-average birth weight, compared with pregnant women who didn't move during the first trimester.

The study, published today (July 30) in the Journal of Epidemiology and Community Health, is one of the first to examine a link between moving to a new home and harmful birth outcomes, the authors said. [18 Ways Pregnancy Changes Your Body Forever]

Still, the study found only an association and doesn't prove that moving causes preterm birth or other harmful birth outcomes. There may be other factors that the study researchers weren't able to take into account, such as the reason for the move, that may affect the risk.

Based on just this one study, it's too soon to make recommendations for women to avoid moving during pregnancy, the authors said.

"Our study is a good first step in identifying moving as a potential risk factor worth researching in more depth, but I don't think we know enough at this point" to make recommendations, study lead author Julia Bond, of the Department of Epidemiology at the University of Washington School of Public Health, told Live Science.

In the meantime, Bond advised pregnant women to discuss any potential stressors during pregnancy, such as a move, with their health care team.

Previous studies have found that pregnant women who experience stressful events in the first trimester — such as natural disasters, economic crises or job loss — are at increased risk for pregnancy problems such as preterm birth.

But little is known about the risks of moving during pregnancy, even though up to a quarter of women move to a new home while pregnant, the authors said.

Overall, the study included data from about 28,000 women who moved during their first trimester and about 112,000 women who didn't move during that time.

The findings held even after the researchers accounted for certain factors that could affect the risk of preterm birth and low birth-weight babies, such as the mother's age, education level, socioeconomic status and smoking habits.

The new study couldn't reveal why moving in the first trimester is linked with an increased risk of preterm birth and low-birth-weight babies. But a number of factors could play a role in that link, including interruptions to health care experienced during moving; the physical strain or emotional stress of moving; and disruptions to social support from family and friends, who may live farther away after the move.

Regardless, "asking patients about plans to move and using that as an opportunity to counsel patients on stress-mitigating techniques and care continuity may be beneficial," the researchers wrote in their paper.

Bond said she hopes future research can look more closely at the different reasons for moving, such as seeking a larger home verus responding to an eviction or an unsafe situation, to examine whether these factors affect the link.

"I think that will help improve our understanding of why we are seeing an association between moving and these adverse birth outcomes," Bond said.