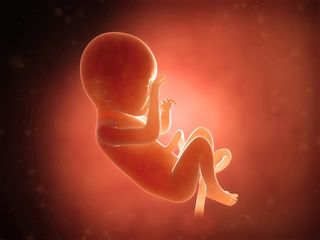 In a scenario ripe for a sci-fi plot, an alien-looking fetus is jolted awake only to find out it's been floating in a dark sac with a continuously pumping tube of blood as its only lifeline. Alarms go off, and the fetus' immune system sends out all its troops to fight off this foreign entity and escape.

This strange-sounding scenario may seem far-fetched, but it could be similar to what happens when a baby is born too soon. In many cases, doctors don't know exactly what triggers a mother's premature labor. But a new study suggests that, sometimes, it may happen because the baby's immune system essentially "rejects" the mother, like a person's body rejects a transplanted organ.

The findings go against the traditional view of the baby's immune system, which was thought to be too young, or immature, to cause such a problem.

"The dogma has always been that the fetus has a very immature immune system, and as a result, people haven't really considered its possible role in pregnancy complications," senior study author Dr. Tippi MacKenzie, an associate professor at the University of California, San Francisco (UCSF) Division of Pediatric Surgery, said in a statement. But the new study suggests that in some cases, "the fetal immune system 'awakens' prematurely and may trigger labor," MacKenzie said.

In particular, this may happen if a woman has a silent infection (meaning it doesn't cause symptoms), which then arouses the fetal immune system, the researchers said. [11 Surprising Facts About the Immune System]

The study is published today (April 25) in the journal Science Translational Medicine.

In the study, the researchers analyzed blood samples from 89 women with healthy (full-term) pregnancies, and 70 women who went into early labor due to "preterm premature rupture of membranes," or breakage of the amniotic sac before 37 weeks of pregnancy, a condition that's often linked to a silent infection in the amniotic sac. The researchers also analyzed samples of umbilical cord blood, which contain fetal cells, from all the women in the study.

In addition, the preterm infants had higher levels of inflammatory chemicals (produced by T cells) in their cord blood, compared with the full-term infants.

For the fetus, triggering early labor could be a strategy to exit a "hostile" environment when there's an infection, lead study author Michela Frascoli, a former postdoctoral researcher in MacKenzie's lab, now an adjunct assistant professor at the University of Massachusetts Medical School, said in the statement.

"If you're a fetus and your immune system is developing in a healthy environment, it's in your best interest to keep things quiet so that you can develop and be born at a normal time," Frascoli said. "But if you encounter trouble in the form of an infection or inflammation, then that can trigger your dendritic cells and T cells to wake up," leading to early labor, she said.

However, preterm birth is linked with a number of serious complications for infants, including death. The researchers are now attempting to find biomarkers in the mother's blood that can identify whether she is at risk for preterm labor due to the fetal immune response.