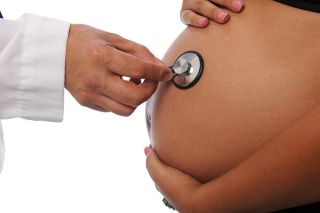 Standing and working for long hours during pregnancy may slow the baby's growth, a new study from The Netherlands suggests.

In the study, women who stood for long periods at work during pregnancy had babies whose heads were, on average, 1 centimeter (or 3 percent) smaller in circumference than that of the average baby at birth.

An analysis of the babies' growth showed these differences were present from the third trimester onwards, the researchers said.

However, working long hours and engaging in physically demanding work during pregnancy did not put women at risk for preterm birth or for having babies with a low birth weight (less than 5.5 pounds).

In addition, earlier studies have found women who work have fewer pregnancy complications than women who are unemployed, the researchers said.

The findings mean that, for women who want to work during pregnancy, "by all means keep working," said Dr. Jill Rabin, an obstetrician and gynecologist at the North Shore Long Island Jewish Medical Center in New Hyde Park, N.Y.

Previous studies have suggested long work hours may increase the risk of birth defects, premature birth, and low birth weight, but have not focused on fetal growth.

In the new study, researchers at the Erasmus Medical Center in the Netherlands analyzed the growth rates of babies from more than 4,600 mothers-to-be. During pregnancy, the growth was measured by ultrasound.

Halfway through pregnancy, women were asked about the conditions of their work environments, and the physical demands of their jobs, including whether their jobs required lifting, prolonged periods of standing or walking, night shift work or long working hours.

Long periods of standing was associated with slower rates of fetal growth, and with a smaller head size at birth. Working more than 25 hours per week also was also linked with fetal head circumference and growth, the researchers said.

There was no negative effect of working up to 36 weeks into pregnancy, the researchers found.

Because the study was conducted in The Netherlands, it's not clear whether the findings apply to other populations, said Dr. Jim Woods, chair of the Department of Obstetrics and Gynecology at the University of Rochester Medical Center.

The study also did not assess how happy women were in their jobs, or whether they experienced stress at work or at home. A healthy mental state can improve the health of the  immune system, and may lead to better pregnancy outcomes, Woods said.

Future studies should follow babies over time to see if the slight difference in head size or birth weight affects of the child's development, Rabin said.

The study is published online today (June 27) in the journal Occupational and Environmental Medicine.

Pass it on:  Standing and working for long hours may affect the growth of babies, but it's not clear whether his effect makes any difference for the health of the baby.