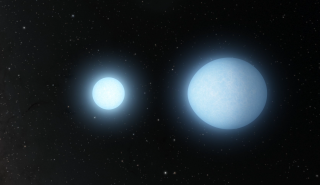 This still from a video illustration shows the stars swinging around each other. (The video, embedded below, is sped up to 120 times the actual speed of the stars.)
(Image: © Caltech/IPAC)

Astronomers have discovered a pair of stars locked in a dizzying orbit. They're moving so fast and they're so close together that they complete a full circle every 6 minutes and 54.6 seconds. The whole whirling system is smaller than the planet Saturn, and the fastest-orbiting binary eve discovered.

The researchers made the discovery using a telescope at Kitt Peak National Observatory, located on Tohono O'odham Nation land within Arizona. Now, after careful study, they suspect this system will generate gravitational waves intense enough for the Laser Interferometer Space Antenna (LISA) — an orbital gravitational-wave detector planned for the mid-2030s — to detect. The researchers described the ultrafast binary system July 24 in the journal Nature.

Spotting a system like this wasn't easy. For telescopes on Earth, binary stars usually look like just a single point of light. But the 48-inch (1.2 meters) telescope at Palomar Observatory in San Diego, currently being used as part of a Caltech survey of the sky, detected something unusual about one particular point. It automatically sent data on that point of light over to Kitt Peak, where researchers pointed a larger 84-inch (2.1 m) telescope at that patch of sky for a closer look. [The 12 Strangest Objects in the Universe]

The Kitt Peak telescope saw an unusual pattern. Every 6 minutes and 54.6 seconds, the system dimmed slightly. That happened when the dimmer of the two stars passed between Earth and the brighter star, eclipsing the bright star's light. Carefully disentangling the light data from the system, researchers figured out that the light was in fact coming from two white dwarfs locked in a bizarrely close orbit.

Near the end of their lives, stars like the sun enter the white dwarf stage after passing through much larger red giant phases. These two whirling binaries will likely collide before they burn out, the researchers said. As they orbit, they lose energy to gravitational waves they emit into the universe and spiral even closer together. Those gravitational waves are too weak for us to spot with any existing detector on Earth, but they're leaching enough energy from the duo that eventually the stars will run out of orbital momentum and collide.

In the meantime though, they're going to blink at Earth for millions of years.