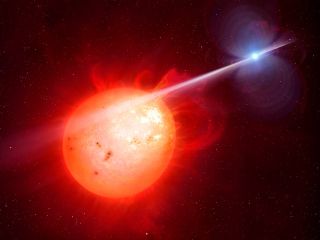 This illustration shows what a binary star system with a red giant feeding material into a white dwarf might look like.
(Image: © European Southern Observatory)

There's a binary star system out there in the Milky Way, and it's acting very weird.

"AG Draconis," as astronomers call it, is made up of two stars: a relatively cool giant and a relatively hot white dwarf — the stellar corpse of a low- to medium-size star. They're 16,000 light-years away from Earth. (A light-year is the distance light travels in a year, meaning everything we see happening on these stars happened 16,000 years ago). And that distance makes them difficult to observe in detail. But we do know some things about them.

The two stars are probably interacting, with material flowing off the surface of the big, cool star and onto the surface of the small, hot star. And every once in a while, about once every nine to 15 years dating back to the 1890s, they become active — going through a period of several years where, once a year, they get much brighter in certain wavelengths that Earth's telescopes can detect. They're in an active period now, with flashes (or "outbursts" of energy) detected in April 2016, May 2017 and April 2018. (The 2016 outburst was a bit weird itself, having two peaks two weeks apart.) Researchers expect another outburst in April or May of this year, though it's too soon for any reports to have been published.

But there's something weird about this period of activity, as researchers reported in a paper uploaded May 10 to the preprint server arXiv, which has not yet been through peer review. [15 Amazing Images of Stars]

Researchers suspect that a cool outburst happens when the white dwarf starts to expand, its outermost, atmosphere-like region growing and cooling at the same time. That doesn't happen during hot outbursts, which are less well-understood.

But this current cycle is weird. Occurring just seven years after a minor outburst in 2008, it's been made up entirely of "hot" outbursts.

"Such behavior is considerably peculiar in [the] almost 130-year history of [the] observing of this object," the researchers wrote, offering no explanation for why it might be happening.

Why does any of this "outbursting" happen at all? No one knows for sure.

The researchers pointed to a paper from 2006 posted to arXiv that offers one popular explanation, derived from a different star system. As the white dwarf's gravity captures material from its giant twin, an "accretion disk" forms — made up of material circling the dwarf and waiting to fall onto its surface. But the disk is unstable, with the giant sometimes feeding more material into it and sometimes less.

Every once in a while, too much material falls onto the dwarf's surface and there's a spike in thermonuclear burning on the outside of the star, where there should be fairly little. That hellish blaze spits material out into the system, forming a brief, hot shell around the white dwarf. From Earth, this all looks like a slight tweak in the light across a few wavelengths.

"The future evolution of AG Dra[conis] is an open question," the researchers wrote. In 2019, they asked, "can we expect (finally) a major, cool or (again) minor, hot outburst?"

It's also possible, the researchers suggested, that this period of minor outbursts will simply end. That happened once before, during the relatively minor activity period of 1963 to 1966.

Long term, they said, this illustrates the importance of keeping a careful eye on stars like these, so that astronomers may one day crack the code of their behavior. It also demonstrates the difficulty of parsing events in solar systems light-years away.