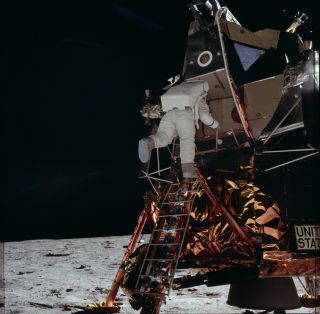 Buzz Aldrin, the second person to walk on the moon, descends the ladder to the lunar surface.
(Image: © NASA)

The Apollo 11 mission to the moon was one of humanity's most incredible feats, but it almost didn't happen. It was nearly derailed by a catastrophe, and several heart-racing moments during the mission could have ended it prematurely.

Other accidents that took place during the 1969 mission could have even doomed the astronauts. (In case that happened, President Richard Nixon had a speech at the ready to deliver to the nation.)

Here are six accidents that almost thwarted Apollo 11's lunar mission. But, thanks to NASA's drive, ingenuity and planning, none of these calamities stopped the astronauts from making it to the moon, and making history. [Apollo 11 Turns 50: A Complete Guide to the Historic Moon Landing]

On Jan. 27, 1967, a fire ignited in the Apollo 1 command module in the middle of a launch rehearsal. All three astronauts inside the module — Roger Chaffee, Ed White and Virgil "Gus" Grissom — died in the blaze.

An investigation later found that a stray spark, likely from damaged wires, started the fire. The module's pure-oxygen environment and flammable interior fed the conflagration. And the astronauts couldn't escape, because the hatch door opened inward and the pressure inside from the fire was so great that the astronauts couldn't pull the door open.

"It [the fire] both threatened the [Apollo 11] mission and made the mission possible," said Robert Pearlman, a U.S. space historian and the founder and editor of collectSpace. "It did set back the program for a year; they didn't fly again until 1968. But it also gave NASA the opportunity to step back, rethink its priorities."

NASA redesigned the hatch and enacted other safety measures, which ensured that the Apollo 11 mission wouldn't face similar obstacles in space.

Armstrong, the first human to walk on the moon, nearly died just over a year before the July 1969 launch. On May 6, 1968, he was piloting the lunar-landing research vehicle, an aircraft meant to simulate a moon landing. During the flight, in Houston, leaking propellant resulted in a total failure of the flight controls.

As the aircraft hurtled toward the ground, Armstrong ejected himself and parachuted down from about 30 feet (9 meters) above the ground. The lunar lander exploded in a fiery ball as it hit the ground, and Armstrong missed certain death by seconds.

Just as Apollo 11 was preparing to land on the moon, the astronauts aboard — Armstrong and Buzz Aldrin — saw their navigational computer flash a 1202 alarm, which meant something was wrong.

It wasn't the astronauts' responsibility to memorize all of the alarm codes, so they radioed down to mission control to determine whether they needed to abort the landing, Pearlman said

Luckily, mission control had gone through every conceivable code during simulations on Earth. This particular alarm signaled a computer overload, but as long as the alarm cleared, the astronauts were good to go, mission control said. Similar alarms went off later, but the mission proceeded. [Interstellar Space Travel: 7 Futuristic Spacecraft to Explore the Cosmos]

"What was happening was that too many commands were being loaded into the computer and it was running out of memory," Pearlman told Live Science. "It was warning that it did not have the ability to calculate everything that was needed to be calculated. But that was OK, because the computer was designed to drop processes as needed, and it had rankings as to what was most critical."

As the Apollo 11 astronauts neared the moon, they had a slight delay that caused them to miss their designated landing spot in the Sea of Tranquility.

Armstrong, the mission commander, realized that the spacecraft was coming down in an area with large craters and boulders. So "he took over manual control and bypassed a large crater and steered past the boulders to find a cleared area [in the Sea of Tranquility] where they could come down safely," Pearlman said.

In the meantime, the craft was running low on fuel, meaning there was a possibility the astronauts would have to abort the mission. "But it was more like when you would drive your car," Pearlman said. "You know that even at the red [empty] line you can drive another 20 miles [32 kilometers] — you have a reserve."

He added, "it's not like he [Armstrong] would be running on fumes, but it was below the projected level of fuel they were hoping to have when they landed."

Finally, the crew landed. Armstrong and Aldrin suited up for the first moonwalk. But as they were putting on their portable life-support-system backpacks (those big, iconic backpacks), the astronauts accidentally knocked off the tip of a circuit breaker. This controlled the power running to an ascent engine — the engine that would blast them off the moon.

When the astronauts saw the damage, they alerted ground control, who worked on a solution while Armstrong and Aldrin went on their moonwalk. However, Aldrin managed to figure it out on his own after they returned to the ship.

"Aldrin, being an engineer, he looked at the opening where the circuit breaker had been and realized that if he could insert something there, he could depress the button that had broken off," Pearlman said. A soft-topped marker did the trick. With the pen, Aldrin "was able to press the circuit breaker in, closing it, and from the ground, they were able to tell from telemetry that it had been successful," Pearlman said. [15 Unforgettable Images of Stars]

A storm prevented the Apollo 11 crew from landing at its designated spot in the Pacific Ocean. The astronauts were simply directed to another Pacific location, but that meant they were far from the recovery ship, the USS Hornet, and had to wait to be picked up, Pearlman said.

Because of that, "there's no TV or film footage of Apollo 11 splashing down, because there was no one there to see it," Pearlman said. "But that could have been a problem for the crew, because if there had been a problem with the spacecraft ... there was no recovery team in place to get to them."

Potential problems with the spacecraft, Pearlman said, could include "if it had taken on water, or if there was an issue with their uprighting balloons that made sure the spacecraft was in a stable position, or if they had had a problem with their parachutes on the way down."

Editor's Note: This story was updated to note that only Neil Armstrong and Buzz Aldrin were aboard the lunar module, called the Eagle, when the computer alarm went off. Astronaut Michael Collins was in the command module orbiting the moon.