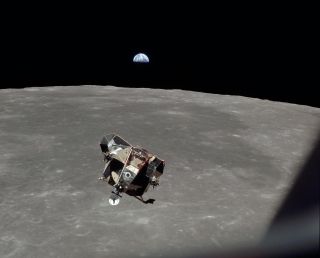 In one of the most dangerous moments of the Apollo 11 mission, Buzz Aldrin and Neil Armstrong pilot the Lunar Module back into orbit around the moon. Had their one attempt to rendezvous with the Command Module failed, the men would be left to die on the moon.
(Image: © NASA)

When astronauts Buzz Aldrin and Neil Armstrong became the first humans to walk on the moon on July 20, 1969, then-President Richard Nixon became the first human to call the moon from a landline phone. In the televised call (patched up to the lunar module by NASA mission control in Houston), Nixon told the astronauts that the whole world was proud of them, and that "because of what you have done, the heavens have become a part of man's world."

At the same time, however, the president was prepared to make another call — to Armstrong and Aldrin's soon-to-be-widowed wives.

Even after the lunar module touched down on the Sea of Tranquility that night, there was no guarantee that Aldrin and Armstrong would be able to make it safely back to the orbiting command module where their crewmember Michael Collins waited, let alone back to Earth. With this in mind, Nixon asked speechwriter William Safire to pen him a contingency plan "in event of moon disaster."

As Safire explained in a 1999 interview with Meet the Press, piloting the lunar module back into orbit to meet the command module was one of the riskiest objectives of the Apollo 11 mission. While the crew of Apollo 10 had previously piloted the lunar module to within 9 miles (14.4 kilometers) of the moon's surface, the Apollo 11 astronauts faced an unprecedented challenge in returning the module to orbit.

"If they couldn't [do it], they'd have to be abandoned on the moon, left to die there," Safire told Meet the Press. "The men would either have to starve to death or commit suicide."

If that had occurred, NASA would have cut off communications with the doomed spacemen, and the President would have been tasked with telling the world what had happened.

Safire's lunar disaster plan— which the speechwriter sent to Nixon's chief of staff H.R. Haldeman on July 18, 1969, and shared with the news media 30 years later — included instructions on how the president should first call the astronauts' widows before delivering a public address to the nation explaining how "fate has ordained that the men who went to the moon to explore in peace will stay on the moon to rest in peace."

More men would follow in the Apollo astronauts’ footsteps, Safire wrote, and "surely find their way home." But Aldrin and Armstrong "were the first, and they will remain the foremost in our hearts."

"For every human being who looks up at the moon in the nights to come will know that there is some corner of another world that is forever mankind," the speech concluded.

Following the somber address, the astronauts were to be given a modified burial at sea in a public ritual that commended their souls to "the deepest depths," Safire wrote.

Despite some setbacks (while moving about the lunar module cabin, one of the astronauts accidentally damaged a circuit breaker that controlled the craft's engines), Aldrin and Armstrong successfully rendezvoused with Collins above the moon, and all three made it safely back to Earth. The president, happily, had no need to recite Safire's tragic statement — however, you can still read the entire speech below, courtesy of the Richard Nixon Presidential Library and Museum.