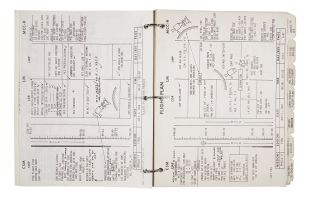 Check marks in the Eagle timeline book were made by astronauts Buzz Aldrin and Neil Armstrong as they navigated to the lunar surface.
(Image: © Christie's Images Ltd. 2019)

A one-of-a-kind item in the history of space exploration goes on the auction block today (July 18) at Christie's in New York City. The timeline book from Apollo 11's Eagle lunar module, annotated by astronauts Neil Armstrong and Buzz Aldrin, is expected to command a staggering $7 million to $9 million.

This remarkable manual, part of the auction "One Giant Leap: Celebrating Space Exploration 50 Years After Apollo 11," rode to the moon in the Eagle module between Armstrong and Aldrin. Entries in this book detailed every step of the procedures that guided the astronauts to the moon's surface and back, half a century ago.

With the Apollo 11 mission (July 16 to July 24, 1969), NASA accomplished a landmark goal for humanity: sending astronauts beyond Earth's atmosphere, touching down on the surface of another world and returning the explorers safely home. The timeline book outlines every stage of the Eagle voyage, from command module separation on July 20 to docking on July 21. This book also bears nearly 150 handwritten completion check marks and notations made by the astronauts as they ticked off their progress along the way. [5 Strange, Cool Things We've Recently Learned About the Moon]

Nearly 200 objects will be presented for auction at "One Giant Leap," beginning at 10 a.m. EDT. But the star of the event is unquestionably the Eagle timeline book. It contains 43 printed pages of instructions, diagrams and illustrations, with dozens of corrections and updates added by mission control, some made within four days of the launch. And it still holds traces of moon dust on its pages, according to the item description.

"During Eagle's voyage itself, Armstrong and Aldrin were profoundly alone. There is no video recording of them and only imperfect audio recording," Christie's representatives said in a statement. "This book is a unique witness to the first manned lunar landing, arguably the most glorious adventure of all time." (Michael Collins, Apollo 11 command module pilot, had a lonelier exploit, as he remained in lunar orbit while his crewmates descended to Tranquility Base.)

"Unique" is one way to describe a volume that holds the first writing taken down on another world. As the Eagle touched down in the Sea of Tranquility on July 20, Aldrin marked the landing coordinates on Page 10 of the book, moments after Armstrong announced to mission control on Earth, "The Eagle has landed."

"There's never going to be a second 'first writing,' so that was really amazing to see in person," said Christina Geiger, Christie's senior specialist for books and manuscripts. As future missions to other worlds such as Mars probably won't have comparable handmade records — their manuals will likely be fully digitized — making the Eagle timeline book even more precious, according to Christie's.

Though Aldrin and Armstrong were the ones who brought the book to the moon and annotated it during the mission, it also represents the efforts of thousands of scientists, programmers, engineers and other technicians who made the mission possible, Geiger told Live Science.

"Seeing the book as a product of such a large team and such a collective human effort is really inspiring," she said. The timeline book is also a direct link to a monumental period in human history, a physical emblem of a moment "when our horizons got a little bigger," Geiger said. All of these factors led her to estimate the book's value in the range of some of the most expensive printed books that have ever sold at auction, she told Live Science.

Other highlights from "One Giant Leap" include original moon maps and module blueprints; autographed photographs; a rocket engine component (partly blackened by test firings); a U.S. flag that flew on Apollo 13; and a small brush used by Apollo 11 astronauts to clean camera lenses on the moon, with grains of lunar dust still embedded in the bristles.

Editor's note: The Apollo 11 lunar module timeline book failed to find a winning bidder and was "bought in" — left unsold and remaining the property of the seller — after bidding peaked at $5 million, Artnet News reported.