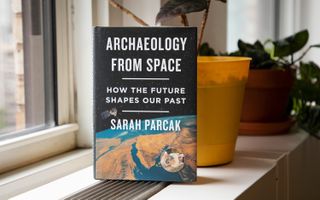 Watch the Live Science Facebook Live interview at 11:30 a.m. EDT today (July 12) and enter to win one of three free copies of "Archaeology From Space: How the Future Shapes Our Past."
(Image: © Live Science)

What is it like to uncover the mysteries of ancient civilizations ... from space?

Archaeologist Sarah Parcak is a pioneer in the field of space archaeology, using images from satellites orbiting high above Earth to detect long-buried signs of cultures that thrived millennia ago.

Her work in Egypt resulted in a breakthrough map of the legendary city of Tanis, made famous in the movie "Raiders of the Lost Ark." But while Parcak's fictional counterpart Indiana Jones dug through dusty sand and crawled through jungles to reach remote sites, much of Parcak's work is conducted on computers, analyzing images that use infrared and lasers to peer below the ground and reveal ancient secrets hidden far below.

In Parcak's new book "Archaeology from Space: How the Future Shapes Our Past" (Henry Holt and Company, 2019), she offers readers a tantalizing glimpse of the technologies that make space archaeology possible; she also reveals extraordinary discoveries that satellites have brought to the surface for the first time in thousands of years.

Live Science sits down with Parcak on Facebook Live today (July 12) at 11:30 a.m. ET, for an interview about her book and her two decades of field work spanning five continents. We'll also be giving away two copies of "Archaeology from Space" (one copy per winner). To participate, leave a comment on the post by 12:01 a.m on July 15. Winners will be selected at random.

The contest rules are below. Don't forget to check Facebook and Twitter for updates on this contest and other live-video events.

'Archaeology From Space: How the Future Shapes Our Past' Giveaway

NO PURCHASE NECESSARY. Open to legal residents of 50 U.S & D.C., 18 or older. Employees, agents, officers & directors of Future plc ("Sponsor"), its parent, subsidiaries, affiliates & advertising & promotion agencies (collectively with Facebook, Inc., “Released Parties”) & members of their immediate family (spouse, parent, children, siblings & their respective spouses, regardless of where they reside) & persons living in the same household, whether or not related, are not eligible. Void where prohibited. Subject to all applicable federal, state & local laws.

HOW TO ENTER: At any time between 11:30 a.m. ET on Friday, July 12, 2019, and 12:30 a.m. ET on Monday, July 15, 2019 (the “Entry Period”), visit the Live Science page on Facebook (“Event Page”), find the post about the giveaway and leave a comment to the post. If, for whatever reason, the Event is cancelled or postponed, this giveaway will not occur. Entries generated by script, macro or other automated means or by any means that subvert the entry process are void. Limit one (1) entry per person/Facebook ID. Multiple entries will be void. Entries become the sole property of Sponsor. Entry must not be offensive or inappropriate, as determined by Sponsor in its sole discretion. Sponsor reserves the right to disqualify any entry and remove any comment that it determines, in its sole discretion, is not in compliance with these Official Rules or is otherwise not in keeping with Sponsor’s image.

WINNER DETERMINATION: Three winners will be randomly selected from the eligible individuals who posted comments during the Entry Period. If, by the end of the Entry Period, no eligible comments are provided, the prize will not be awarded. Odds of winning depend on the number of eligible entries received.

WINNER NOTIFICATION: Potential winners will be notified via a comment on his/her winning post and via Facebook Messenger & he/she will have 24 hours from notification to respond to Sponsor. The failure to respond to such notification or the potential winner’s noncompliance with these Official Rules may result in disqualification, & at Sponsor’s sole discretion, prize may be awarded to an alternate winner.

Prize: A copy of "Archaeology From Space: How the Future Shapes Our Past" (2 prizes available). Approximate Retail Value: $30.00. Total Prize is awarded "as is" with no warranty or guarantee, either express or implied. Winner is responsible for all federal, state & local taxes. Winner may not substitute, assign or transfer prize, but Sponsor reserves the right, at its sole discretion, to substitute prize (or portion thereof) with one of comparable or greater value. Prize cannot be redeemed for cash. All prize details are at Sponsor’s sole discretion.

GRANT OF RIGHTS: By submitting an entry, each entrant grants to Sponsor and its licensees, successors and assigns an irrevocable, perpetual, unlimited, royalty-free, fully paid-up license to reproduce, distribute, display, exhibit, exploit, perform, edit, create derivatives of, & otherwise use the entry & all elements of such entry, together with any other material, and the name, user name, city & state of residence, voice, image and/or likeness of entrant, in any & all media now known or hereafter devised, in any manner, in whole or in part, worldwide, without compensation or notification to, or permission from, entrant or any third party, for any purpose whatsoever, including without limitation, for purposes of advertising or trade.

CONDITIONS: By participating, each entrant agrees: (a) to abide by these Official Rules & decisions of Sponsor & judges, which shall be final & binding in all respects relating to this giveaway; and (b) to release, discharge & hold harmless Released Parties from any & all injuries, liability, losses & damages of any kind to persons, including death, or property resulting, in whole or in part, directly or indirectly, from entrant’s participation in the Giveaway or the acceptance or use of prize.  Released Parties are not responsible for (i) lost, late, incomplete, damaged, inaccurate, stolen, delayed, misdirected, undelivered or garbled entries; or (ii) errors or difficulties of any kind, whether human, mechanical, electronic, computer, network, typographical, printing or otherwise, relating to or in connection with the giveaway, including, without limitation, errors or difficulties which may occur in connection with the administration of the giveaway, the processing of entries, the announcement of the prize or in any giveaway-related materials.  Persons who tamper with or abuse any aspect of the giveaway or the Event Page, who act in an unsportsmanlike or disruptive manner or who are in violation of these Official Rules, as solely determined by Sponsor, will be disqualified & all associated entries will be void. Should any portion of the giveaway be, in Sponsor’s sole opinion, compromised by virus, worms, bugs, nonauthorized human intervention or other causes which, in the sole opinion of the Sponsor, corrupt or impair the administration, security, fairness or proper play, or submission of entries, Sponsor reserves the right at its sole discretion to suspend, modify or terminate the giveaway & if terminated, at its discretion, select winner as deemed fair & appropriate by Sponsor. Information submitted in connection with this giveaway will be used in accordance with Sponsor’s Privacy Policy, available at https://www.futureplc.com/privacy-policy/.

WINNERS’ NAMES: Winners’ names will be posted on the Event Page following the end of the giveaway.

Sponsor: Future plc, 11 West 42nd Street, 15th Floor, New York, New York 10036. This giveaway is in no way sponsored, endorsed or administered by, or associated with, Facebook. You understand that you are providing your information to Sponsor & not to Facebook.