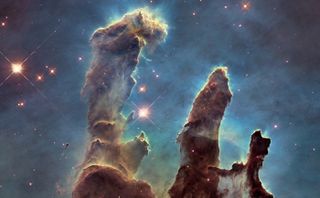 These towers of cosmic dust and gas make up part of the Eagle Nebula, also called the "pillars of creation."
(Image: © STScI/AURA)

Interstellar space should be filled with iron — one of the most common elements in the universe — but scientists have detected only very low amounts of it to date. Now, a new study suggests iron may not be missing, but just really good at hiding.

A group of researchers proposes that interstellar iron combines with a certain type of carbon chain to form molecules called iron pseudocarbynes. But because these iron pseudocarbynes register the same signature as carbon molecules on scientists' detection devices, the sneaky iron remained hidden, according to a statement from Arizona State University (ASU).

"We are proposing a new class of molecules that are likely to be widespread in the interstellar medium," lead author Pilarisetty Tarakeshwar, research associate professor at ASU's School of Molecular Sciences said in the statement.

In the extremely cold temperatures of interstellar space, carbon chains might condense onto iron clusters to form these iron pseudocarbynes, they reported. Over billions of years, the iron pseudocarbynes would combine with other elements and form even more complex molecules.

Tarakeshar and his team examined the structure and properties of these molecules in the lab. They used infrared spectroscopy to look at the molecule's signature spectra, or the pattern of light that gets reflected off from them.

"We calculated what the spectra of these molecules would look like, and we found that they have spectroscopic signatures nearly identical to carbon-chain molecules without any iron," Tarakeshar said. "Previous astrophysical observations could have overlooked these carbon-plus-iron molecules."

What's more, the iron pseudocarbynes might explain how complex molecules of carbon exist in interstellar space. Carbon chains of more than nine atoms of carbon are unstable, according to the statement. But these iron clusters might be sticking onto them and stabilizing them with their grip.

The findings were published on June 26 in the Astrophysical Journal.