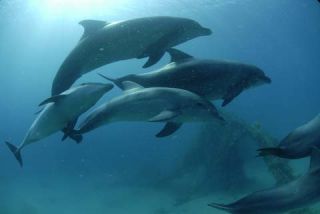 The news comes out of a new study that researchers say is the most complete and detailed survey of the repertoire of sounds used by bottlenose dolphins (Tursiops truncatus) to communicate. The data was collected over years, starting in 2005, in the waters off the Italian island of Sardinia.

Until now, scientists thought that dolphins' whistle sounds were the most common and important noises they make. These melodious tonal sounds allow dolphins to stay in contact with each other (especially mothers and offspring), and to coordinate hunting strategies.

But in the new study researchers investigated so-called burst-pulsed sounds, which are more complex and varied than the whistles. These calls turn out to be vital to the animals' social life, the scientists report.

The burst-pulsed sounds are used "to avoid physical aggression in situations of high excitement, such as when they are competing for the same piece of food, for example," said lead researcher Bruno Díaz of the Bottlenose Dolphin Research Institute in Sardinia.

Bottlenose dolphins make longer burst-pulsed sounds when they are hunting and at times of high aggression, he said, and these calls allow each individual to maintain its position in the hierarchy.

"Burst-pulsed sounds are used in the life of bottlenose dolphins to socialize and maintain their position in the social hierarchy in order to prevent physical conflict, and this also represents a significant energy saving[s]," Díaz said.

These strident sounds can be heard when multiple dolphins are moving toward the same prey. The least dominant one will often move away in order to avoid confrontation. Unlike human sounds, these dolphin noises can be directed at a particular individual, rather than just sent out in all directions.

"One dolphin can send a sound to another that it sees as a competitor, and this one clearly knows it is being addressed," Díaz said.

The study is detailed in the new book “Dolphins: Anatomy, Behaviour and Threats” (Nova Science Publishers, 2010).