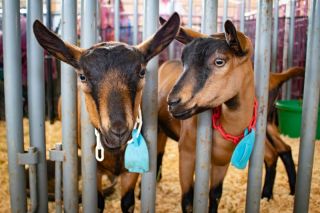 A toddler died from an E. coli infection, and three other children fell ill with the same disease, after visiting the San Diego County Fair last month, according to health officials.

On Friday (June 28), the San Diego County Health and Human Services Agency announced that four children ages 2 to 13 had become infected with E. coli after attending the fair from June 8 to June 15.

In three of the four cases, the children were not ill enough to require hospitalization. But one child, a 2-year-old boy, was hospitalized and died from complications of the disease on June 24, the agency said in a statement.

All of the children were infected with Shiga-toxin-producing E. Coli (STEC).

Although most people recover from this illness, about 5% to 10% of those infected will develop a life-threatening kidney infection, the statement said.

The Shiga toxin produced by the bacteria destroys red blood cells, and those damaged blood cells can block the kidneys' filtering system, leading to a condition known as hemolytic uremic syndrome (HUS), according to the National Institute of Diabetes and Digestive and Kidney Diseases.

HUS can lead to kidney failure, which itself can be fatal. However, people don't usually die from kidney failure anymore, because it can be treated with dialysis, Dr. Amesh Adalja, a senior scholar at the Johns Hopkins University Center for Health Security, told Live Science in an interview last year.

Instead, most deaths associated with HUS result from other complications, such as bleeding (due to the toxin interfering with blood clotting), stroke or brain swelling, Adalja said. In addition, since an E. coli infection causes diarrhea, it can also cause a tear (perforation) in the colon, which allows fecal matter to leak into the body, and this can also be deadly, he said.

The source of the children's infection is still under investigation, but all of the sick children visited animal areas at the fair, such as the petting zoo, the statement said. Fair officials have now closed public access to all animal areas.

To prevent a STEC infection, health officials recommend washing hands often, including after contact with animals or their environments (such as farms, petting zoos, etc.) and before eating and drinking, the statement said.