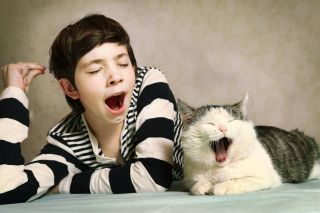 As the weather warms and pollen begins its dance across the sky, some people's bodies hurl them into a storm of watery eyes, runny noses and sneezing fits.

But sometimes the spring and summer months also bring bouts of tiredness. Can people with allergies also blame this on seasonal allergens? The answer is yes; there are several ways that seasonal allergies can make us feel low on energy.

An allergy or allergic reaction is, by definition, a fight that the body puts up when it's faced with a foreign invader, such as pollen, said Dr. Kara Wada, an allergist and immunologist at The Ohio State University Wexner Medical Center. [Can You Learn Anything While You Sleep?]

"The body expends a lot of energy in making all of the cells, proteins and all of the other substances" that build up during an allergic response, also known as inflammation, she said.

This energy expenditure wears out the body and "some of the same chemical signals … in addition to fighting off what it sees as an enemy, makes you feel unwell" and rundown, she said. This effect in seasonal allergies is like a watered-down version of the extreme tiredness that can overtake people who eat something they're allergic to.

Allergies can also indirectly cause you to feel tired by robbing you of sleep. "It's not uncommon to hear that people have poorer quality sleep from their allergies," Wada told Live Science, especially "if their nose is so stuffed up they have to breathe from their mouth or [if] post-nasal drip wakes them up in the middle of the night."

Why exactly do allergies make sleeping challenging? In essence, the body fights what it deems as foreign substances in the body by sending its little molecular army to the site of the invasion, causing inflammation there. Inflammation or swelling of the lymphatic tissue behind the nose, called the adenoids, could lead to a person breathing with their mouth open, which, in turn, can disrupt sleep, said Dr. Gloria Riefkohl, a pediatrician at Nicklaus Children's Hospital in Miami.

This disruption happens because when the adenoids get larger, they can cause obstruction in nasal passageways, which can reduce the amount of oxygen we need to breathe comfortably, said Dr. Priyanka Seshadri, a pediatric resident also at Nicklaus Children's Hospital.

"Seasonal allergies can definitely also affect concentration," she said. "Kids could be misdiagnosed with ADHD [attention-deficit/hyperactivity disorder] or a learning disability when sometimes it is just really bad allergies."

"Especially if you're not getting good quality sleep, we know that that can result in not as clear thinking, not as much focus," Wada said. "That's not going to lead to being your best self [while trying to work]."

Finally, people can become drowsy while trying to cure their allergies. The most common allergy-fighting medications are called antihistamines (histamines are a chemical the body releases during allergic reactions). But a common side effect of some of these medications, such as diphenhydramine (brand name Benadryl), is drowsiness, Riefkohl said.