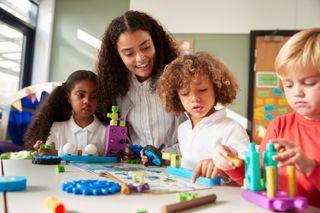 If you're wondering why your salary is so low, it bears asking: Were you inattentive as a kindergartner?

According to a 30-year study, children who were distracted kindergartners earned less money, on average, in their early 30s than their more attentive classmates did.

While these findings may seem discouraging (after all, aren't kindergartners known for being rambunctious?), the researchers see it another way. "Early behaviors are modifiable," they wrote in the study, "making them key targets for early intervention." [11 Facts Every Parent Should Know About Their Baby's Brain]

In other words, if this behavior is caught early enough, perhaps children can learn to become more attentive over time, which could help them later in life, the researchers said.

Even so, these results are correlational, meaning it's not clear if one feature actually causes another. And, according to an expert not involved in the study, it's unclear why the link between inattention and lower salary exists.

In the study, researchers pulled data from the Quebec Longitudinal Study of Kindergarten Children to see what behavioral ratings teachers gave 2,850 kindergarteners living in Canada. Nearly all of the children (96%) were white and ages 5 or 6 when the ratings were taken in 1985.

Children were rated as inattentive if they met the following criteria: They lacked concentration, were easily distracted, had their head in the clouds and lacked persistence.

Then, about 30 years later, the researchers took the average of these children's tax returns filed from 2013 to 2015. After adjusting for participant IQ and family background (which included factors such as the parent's education levels, ages, employment status and whether the family structure was intact or not), the researchers found a significant pay gap between the inattentive and attentive students.

At the time of follow up, the average salary for men was $27,500 and $15,200 for women (in U.S. dollars). The teachers had rated the children on a sliding scale; for each 1-unit increase in inattention the children received, the men earned about $1,271 less a year, while the women were paid $924 less annually.

Moreover, kindergarten ratings of physical aggression (fighting, bullying, kicking and biting) and opposition (disobeying, refusing to share materials, blaming others, being inconsiderate and acting irritable) were associated with lower earnings (about $700 less annually), but only for the boys.

On the flip side, kindergarten boys who were more prosocial (behaviors that included stopping quarrels, inviting bystanders to join in a game and helping people who were hurt) earned an average of $476 more a year as adults than less prosocial boys, the researchers found.

"The association between childhood behaviors and future earnings is not surprising," the researchers wrote in the study. "Children who fight with their peers, are careless in their work, do not attend to instructions and do not complete assignments are likely to underperform in school and subsequently in the workplace as adults, which may be associated with lower earnings." [5 Ways to Talk to Your Kids About Bullying]

Don't banish rule-breaking Johnny to the low-wage bin just yet, though. This study has several strengths and a few weaknesses, said Jessica Agnew-Blais, a medical research council postdoctoral research fellow at the Social, Genetic & Developmental Psychiatry (SGDP) Centre at King's College London, who wasn't involved with the research.

It's important to know that "this association between childhood behavior and adult earnings can be identified quite early in schooling — already by kindergarten," especially because "this could allow for better early intervention," Agnew-Blais told Live Science in an email.

However, the study leaves many questions unanswered. For instance, "What level of inattention symptoms mean a child should screen positive, i.e., receive an intervention?" Agnew-Blais asked. "Would there be any negative effects of being identified as needing additional support, for example stigma? ... These questions go beyond the scope of the current study, but would be important to consider if children were to be screened for these problems."

It would also be helpful to know the exact cause of this link between inattention and lower earnings later in life, she said. For example, "Is it through peer relationships? Educational problems? Poor social support? Poorer mental health in adulthood?" Agnew-Blais asked. "This is not really a weakness of this study, per se, but an area for future research."

"Sadly, funding is being cut for exactly these types of programs in many countries," Agnew-Blais said.

The study was published online yesterday (June 19) in the journal JAMA Psychiatry.