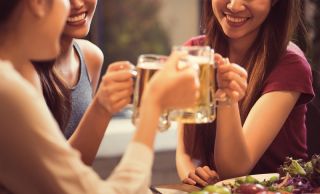 Drinking alcohol is known to raise women's risk of developing breast cancer, but many women aren't aware of this link, a new study from the United Kingdom suggests.

The new study was conducted at a single health center in the U.K., and so the findings don't necessarily apply to the general population. But the findings do agree with previous research conducted in the United States: A 2017 survey by the American Society of Clinical Oncology found that 70% of Americans didn't know that drinking alcohol is a risk factor for cancer.

It's estimated that alcohol consumption is responsible for around 5% to 11% of all breast cancer cases, with higher risks seen among heavy drinkers. A recent study also estimated that drinking a bottle of wine a week is the equivalent of smoking 10 cigarettes per week for women, in terms of their overall cancer risk.

The new study also suggests that it may be difficult for people to estimate exactly how much alcohol they consume. The study showed that more than half of participants couldn't correctly estimate the alcohol content in any of four commonly consumed alcoholic drinks — a glass of wine, a pint of beer, a liter of cider and a bottle of liquor.

"This suggests that many women may be unaware that their level of alcohol consumption may be increasing their risk of breast cancer," the authors wrote in the June 18 issue of the journal BMJ Open.

It's possible that breast cancer screenings and visits for breast cancer symptoms might serve as "teachable moments" to inform women about ways to decrease their breast cancer risk, such as by reducing alcohol consumption, the authors said.

Indeed, when women in the study were asked how they would feel about having a 5-minute session in which they were provided with cancer prevention information at their breast cancer screenings or appointments for breast symptoms, about 30% percent said this would make them more likely to attend those appointments, and 70% said it would make no difference.

This suggests that "women would not be put off attending breast [cancer] screening or clinic appointments if they were aware they would receive some cancer prevention education," and may in fact be more likely to attend, the authors said.

However, more research would be needed about how to best deliver such information. Both patients and health care providers expressed concern that such sessions might come across as placing stigma on women who drink or blaming women for drinking.