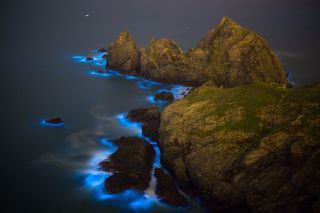 The "Blue Tears" in the East China Sea are actually caused by toxic algae, and new research suggests they are growing bigger every year.
(Image: © WanRu Chen/Getty)

On summer nights, the waters surrounding Taiwan's Matsu Islands cast an eerie blue glow. The phenomenon, known as China's "blue tears," is actually caused by a bloom of tiny, bioluminescent creatures called dinoflagellates. Tourists from all over China come to view the twinkling seascape.

The bloom in the East China Sea may be beautiful, but it's also toxic. And it's growing bigger every year, a recent study finds. [Gallery: Eye-Catching Bioluminescent Wonders]

"People think this is romantic and beautiful to watch at night," Chanmin Hu, an oceanographer at the University of South Florida and study co-author, told Live Science, "It's toxic."

Hu and his team of researchers used satellite data to track the size of the bloom over time. By analyzing nearly 1,000 satellite images from the past 19 years, the researchers were able to identify a signature unique to blue tears — the wavelengths of light reflected by this particular creature, but not others. "It's like a fingerprint," Hu said. Using this fingerprint, they found that the bloom, which is typically seen near shore, is extending its reach into deeper waters.

That's a problem for marine creatures.

The blue tears phenomenon can poison sea life, from fish to sea turtles. The bloom can even make humans sick, Hu said. The dinoflagellates actually aren't toxic themselves — until they begin chowing down, he said. Toxic algae is their food of choice, and as they eat, they release ammonia and other chemicals that poison the water around them. Not only that, but these creatures breathe oxygen until there's none left in the surrounding waters.

"The oxygen in the water is so low that many animals can die," Hu said.

The cause of blue tears isn't certain, but Hu and his colleagues think pollution from agriculture that funnels down the Yangtze River plays a major role. The river dumps fertilizer into the East China Sea, giving blue tears massive doses of the nutrients it needs to grow.

Hu and his colleagues noticed that the size of the bloom was particularly low during the construction of the controversial Three Gorges Dam, between 2000 to 2003. It so happens that during those years, the Yangtze River's flow had decreased markedly. In 2003, when dam construction was complete and the Yangtze River began to flow more strongly again, Hu saw the bloom begin to grow once more.

Hu and his colleagues don't expect the bloom to stop growing anytime soon. That means it will continue to pose a threat to marine life. And the waters will glow more brilliantly.