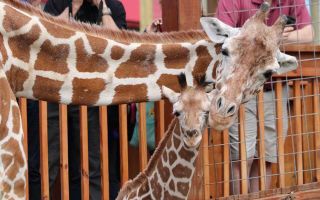 April gave birth to Tajiri — a male calf — in 2017. Her fifth calf, named Azizi, was born in March, and he will be her last.
(Image: © Animal Adventure Park)

April the giraffe rocketed to fame on the internet in 2017 with a live-streamed pregnancy and birth that captivated hundreds of millions of viewers. But the now five-time mama is done having babies.

On June 6, Jordan Patch, owner of Animal Adventure Park in Harpursville, New York, announced on Facebook that April would be retiring from the park's giraffe breeding program, and that she would begin taking a regimen of contraceptives beginning June 7.

April delivered her most recent calf, a male named Azizi, on March 16, with an audience of more than 300,000 people watching the event live on YouTube, park representatives told the Associated Press. Previously, in 2017, April gave birth to another male, named Tajiri. Now, at the age of 17, April will live out the remainder of her life at the park without further pregnancies, Patch said on Facebook. [It's a Boy! See First Photos of Newborn Giraffe]

"Being 17 years old, and having given birth to five calves, April is a mature giraffe mother," Patch told Live Science in an email. "April has surely done her part in propagation and will remain a star of education and conservation initiatives."

April's nursing calf Azizi is now nearly 3 months old; he is already standing more than 7 feet (2 meters) tall and has started eating solid foods, Patch said on Facebook. This week, the giraffe pair will be moved from their current enclosure in "Barn One" to the park's second giraffe barn, where they will live with Tajiri, April's older calf.

Oliver, the male giraffe who fathered Tajiri and Azizi, will have a new companion in Barn One: a young female named Johari, Patch said.

Birth control is typically administered to wild animals in captivity through hormone supplements in their food or through slow-releasing hormone implants, though apes may be given human birth control pills, according to the American Association for the Advancement of Science.

A giraffe's average life span is around 20 to 25 years in captivity, but despite April's advanced age, she is still fertile. While menopause — a life stage in females when reproductive ability ceases — occurs naturally in some species, most female animals remain reproductively viable (though with reducing success) through old age and until death.