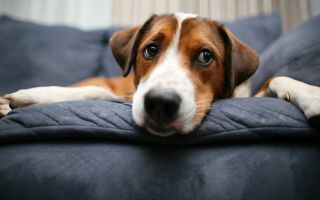 The smell of a wet dog is actually produced by microbes that live on its hair and skin.
(Image: © Shutterstock)

You wake up the morning after a late-night party with friends who are smokers, and the pungent stench of their cigarettes or cigars is still in your hair. Or maybe you plop down on the couch and wrinkle your nose at the fragrance of wet dog, which is still detectable even though it's been days since your damp pooch rolled on the cushions.

Your nose and brain can detect a lot of smells — about a trillion of them, according to recent estimates. But while many smells come and go relatively quickly, others seem to take up long-term residence in fabric, clothing and hair.

Why do some smells linger longer than others do, and what makes these tenacious scents harder to banish for good? [Why Does Asparagus Make Your Pee Smell Funny?]

Our sense of smell activates when special sensory cells in our noses, called olfactory receptor neurons, react to certain molecules in the gas phase and generate a signal to the brain. Different receptors "recognize" different molecules based on the molecules' shapes and the configuration of atoms on their surfaces, said Christopher Cramer, a professor in the Department of Chemistry at the University of Minnesota.

"There's a lock-and-key level of specificity, with some receptors being SUPER-specific, while others are more promiscuous," Cramer told Live Science in an email. Certain chemical cues are interpreted as pleasant smells, while other molecular configurations trigger disgust.

Tobacco smoke is a complex brew, containing thousands of chemicals produced by the burning tobacco leaves and additives, according to the American Cancer Society. Chemicals that are left behind when the smoke dissipates can saturate clothing, textiles, carpets and furniture; the residue is sometimes referred to as "third-hand smoke," the Mayo Clinic reported.

Wet-dog smell stems from microorganisms that live on canine fur and skin. These microbes produce smelly compounds that are liberated from the dog when mixed with water, and are released into the air when the water evaporates, British chemistry teacher Andy Brunning wrote on his chemistry blog Compound Interest.

One of the most infamous and revolting odors in nature is skunk spray, which the animals release when they feel threatened. Chemicals in the spray known as thiols — similar to alcohol but with one sulfur atom — produce the prodigious stink, according to National Geographic. Compounds in the spray release slowly over time, and can make a sprayed animal or person smelly for days or even weeks, Willam Wood, an emeritus professor in organic chemistry and chemical ecology at Humboldt State University in California, wrote in 1992 in Peak Insight Journal.

Whether or not an unpleasant scent will linger depends on several factors. One consideration is the substance's volatility, or how easily it transforms from a liquid to a gas. The more volatile a liquid is, the more of it becomes airborne — and the more likely it is to invade your nose, Cramer explained.

Sensitivity to certain pungent aromas stems from the sensitivity of those receptors, and that can affect how long we are able to detect their foul stench, Cramer said. For example, if a molecule releases into the gas phase slowly but a person is very sensitive to it, it will take a very long time to disperse to the point that it's undetectable to that sensitive person's nose.

Materials that come into contact with smelly gasses can also affect how long aromas will stick around. Fabric, hair, carpet and even cement are highly porous, "and that can significantly reduce the volatility of molecules that enter into those pores and find them very comfortable places to occupy," Cramer said.

In those cases, there may also be another factor at play, called "an affinity aspect," Cramer noted. Many of the organic molecules that produce unpleasant odors don't like water. Polymers such as those in fabric and carpet are also averse to water; the organic molecules cling to them because they share a similar aversion. This further reduces the volatility of the molecules — but just because they're less volatile, that doesn't necessarily get rid of their lingering stink, he added.

"Lower volatility doesn't mean NO smell, it means LESS smell and LONGER for that smell to go away," Cramer said in the email. "So, if you're really sensitive to that smell, you're going to be stuck with it for a long time."