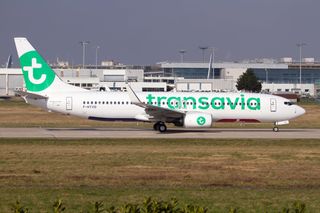 Last month, a Transavia Airlines flight from the Canary Islands bound for the Netherlands had to reroute to Portugal after a man's overwhelming odor caused some passengers to vomit.
(Image: © Fabrizio Gandolfo/SOPA Images/LightRocket via Getty Images)

Last month, a Transavia Airlines flight had to reroute after a man's overpowering odor caused some passengers to vomit. It turned out, that pungent smell was caused by an infection that was rotting his insides.

The 58-year-old man died less than a month later, on Monday (June 25), after his organs failed.

Andrey Suchilin, a Russian guitarist, was on vacation in the Canary Islands of Spain when he contracted the infection. Before heading back, he visited a doctor, who told him it was a typical beach infection and gave him some antibiotics, CBS News reported. [27 Devastating Infectious Diseases]

But when his odor caused Suchilin's plane to the Netherlands to be rerouted to Portugal, he was taken to the hospital, where his condition worsened. Doctors diagnosed him with tissue necrosis, or tissue death. He was put into a medically induced coma, but neither surgeries nor antibiotics seemed to improve his condition. He later died of organ failure, CBS News reported.

This infection was likely caused by flesh-eating-bacteria, said Dr. William Schaffner, an infectious-disease specialist at Vanderbilt University in Tennessee. Typically, bacteria need oxygen to grow, Schaffner said. But these particular bacteria can function without ready access to oxygen, Schaffner said. So, if they get deep into the body through wounds, they can stay there, multiplying and destroying muscle and other soft tissues.

As these bacteria infect the body, they cut off blood supplies to the tissues, causing them to rot. By the time Suchilin boarded the plane, clearly "the infection had progressed, [and] substantial amounts of muscular tissue were … literally rotting," Schaffner told Live Science. And rotting tissue inside the body can have a "pungent and offensive odor."

According to Schaffner, infections by flesh-eating bacteria are "very unusual." But they can, from time to time, happen in certain circumstances: when a person has an injury or an open wound near a water environment.

With early diagnosis or treatment, people can typically be saved, Schaffner said. But sometimes, knowing such an infection is happening can be quite tricky, he added.

The first thing to do if you get a cut is to wash it out and pay attention to any redness, swelling or discharge that may indicate a more serious infection Schaffner said. However, since these infections can be deep in the tissue, affecting the muscle, "they can be quite deceptive."

He added that "what almost invariably accompanies these illnesses is substantial pain," pain that doesn't seem like it should be so intense based on how the cut looks on the surface. Then, you know there's something is going on deep in the body, he said.

Treatment of such infections involves a combination of antibiotics and surgical procedures to remove the affected tissue and thereby stop the bacteria from spreading, Schaffner said. Sometimes, patients can do really well but can be left with a major disability because so much tissue has to be cut out, Schaffner said.

"This is a terribly sad story of diagnosis and treatment delay[s] for a very, very serious infection," he added.