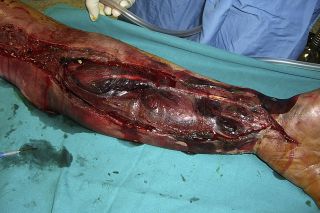 The case of a man who developed two simultaneous infections of necrotizing fasciitis, as the condition is properly called, illustrates how sneaky these devastating infections can be, according to the report of his case. An infection in two areas of the body only complicates an already-complicated diagnosis, surgeons wrote in the report, published online Sept. 21 in the Journal of Emergency Medicine.

"It's difficult to diagnose necrotizing fasciitis, because in the early stages, the signs and symptoms tend to be very wide, very general, very easily confused with minor diseases and minor conditions," said study researcher Dr. Ilaria Tocco Tussardi of the Institute of Plastic Surgery at University Hospital of Padova in Italy.

Tocco Tussardi and her colleagues were part of the team that treated a 44-year-old man who first sought medical treatment for a fever and severe back pain that over-the-counter painkillers couldn't ease. His doctor had prescribed stronger painkillers, but the fever continued, and the man's right buttock became red and inflamed, prompting the administration of antibiotics.

The antibiotics did not make any difference. Within six hours, the man's left arm turned red and began to swell, and he became sicker. He was transferred to the emergency room.

There, doctors conducted a computed tomography (CT) scan and found that the fascia, which is the connective tissue that covers the muscle, in the man's arm and buttock appeared thickened. There were gas bubbles in his gluteus muscle, the muscle of the buttock. Those findings had doctors fearing the worst: necrotizing fasciitis. [13 Oddest Medical Cases]

In fact, one of the ways surgeons confirm the infection is by opening the afflicted area and running a finger along the tissue. If the finger cuts through the tissue as easily as a knife would, doctors know they have a case of flesh-eating bacteria, according to Tocco Tussardi and her colleagues. Another sign is grayish, foul-smelling "dishwater" pus in the affected tissue.

The Streptococcus bacteria typically enter the body through a small cut or blister, although, in the case of the 44-year-old man, there was no history of a wound and no indication of how he contracted the infection, Tocco Tussardi told LiveScience. He did have diabetes, which can affect immune-system function.

Even more unusual, the man had two sites of infection. In 50 years, only 33 such cases have been reported in the scientific literature, the researchers said.

Most likely, the bacteria managed to break into the bloodstream from one infection site and spread to the other, Tocco said, though doctors aren't sure which site was infected first. By the time the man arrived at the hospital, he was already in critical condition and was having trouble breathing — a sign of a whole-body septic infection.

Surgeons rushed the patient to the operating room to confirm the diagnosis and to begin the treatment: removing as much of the infected tissue as possible. Doctors then started administering antibiotics intravenously.

Two more surgeries to remove the infection revealed that nearly all of the tissue in the arm had died; surgeons amputated the limb in an effort to halt the damage.

Their efforts, however, were unsuccessful. The infection subsided, but the diagnosis had come too late, Tocco Tussardi said. The septic shock had compromised the man's heart, circulatory system and respiratory system. He slipped into a coma and was eventually transferred to a residential facility for permanent coma patients.

The difficulty of diagnosing necrotizing fasciitis early explains, in large part, why 25 percent to 30 percent of cases are lethal, Tocco and her colleagues wrote.

"Usually, the physician who is seeing a patient with signs that might be compatible with necrotizing fasciitis doesn't usually think about it as the first diagnostic option," Tocco said.

Red flags for early-stage necrotizing fasciitis include swelling and redness, along with pain severer than that typically associated with a small scrape or bruise. In children, at least, the chances of contracting or dying from necrotizing fasciitis have stayed stable since the late 1990s, according to research published in April 2012 in the journal Archives of Otolaryngology — Head & Neck Surgery.

Pass it on: Early diagnosis of rare flesh-eating bacterial infections is key to successful treatment.