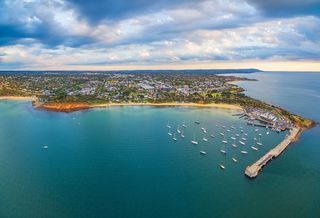 A disease called Buruli ulcer is spreading in Australia, particularly in the state of Victoria. Above, a view of the Mornington Peninsula, an area where the disease is spreading.
(Image: © Shutterstock)

It sounds like a movie plot: A mysterious "flesh-eating" disease is spreading, and no one knows how to stop it. But that's the situation health officials in Australia are facing now as they try to tackle a growing "epidemic" of a condition called Buruli ulcer.

In recent years, Australia has seen a rapid rise in cases of Buruli ulcer, an infection that causes ulcers on the skin and can destroy skin and soft tissue. In 2016, there were 186 reported cases of the infection in Australia, up from 74 cases in 2013 — an increase of 150 percent, according to the World Health Organization (WHO). Cases increased even further in 2017, with a projected 286 cases for that year, according to a new report from researchers in Victoria, Australia.

"As a community, we are facing a rapidly worsening epidemic of a severe disease without knowing how to prevent it," the researchers wrote in the report, published yesterday (April 16) in The Medical Journal of Australia. "We therefore need an urgent response" to tackle the disease, they said.

Buruli ulcer is not unique to Australia; the infection has been reported in 33 countries in Africa, South America and the Western Pacific, according to the WHO. In 2016, there were 2,206 cases worldwide, with Australia and Nigeria reporting the most cases. And although cases have been reported in Australia as far back as 1948, the country has seen a spike in cases since 2013.

The situation is particularly concerning in Victoria, where cases appear to be "becoming more severe in nature, and occurring in new geographic areas," the report said.

Buruli ulcer is caused by a bacterium called Mycobacterium ulcerans, which belongs to the same family of microbes that cause tuberculosis and leprosy. The bacteria produce a toxin that destroys tissue, leading to large ulcers, often on the arms or legs, the WHO says. Without early treatment, patients may develop long-term disabilities, such as limited joint movement, or require plastic surgery.

Although it's unclear exactly how the disease is spread, researchers have some theories — for example, the disease may pass to humans from insects found in water, according to the U.S. Centers for Disease Control and Prevention. Specifically, mosquitoes have been suggested as carriers of the disease; the insects have been found to test positive for M. ulcerans, and the use of insect repellent has been linked with a reduced risk of infection, according to the new report.

Animals in Australia — including possums, dogs, cats and koalas — have also been found to develop Buruli ulcer, but it's still uncertain whether they play a role in spreading the disease, the report said. Recent evidence suggests that the infection does not spread from person to person.

The researchers called for a "thorough and exhaustive examination of the environment, local fauna, human behavior and characteristics, and the interactions between them" to better understand the disease and its risk factors. "It is only when we are armed with this critical knowledge that we can hope to halt the devastating impact of this disease through the design and implementation of effective public health interventions," the researchers concluded.