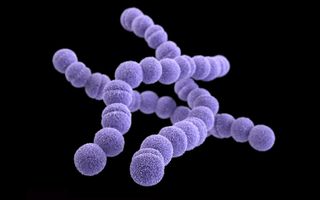 Bacteria that "eat" your flesh are also hijacking your pain receptors for their own benefit.

The microbe Streptococcus pyogenes causes strep throat, but it's also responsible for a deadly "flesh-eating" disease called necrotizing fasciitis. During the initial stages of the flesh-destroying infection, the bacteria emit a toxin that causes excruciating pain. And this awful side effect is very useful to S. pyogenes; the chemical that causes the intense pain also hampers the host’s immune system and creates a more hospitable environment for the microbe to thrive and reproduce, scientists recently discovered. [27 Devastating Infectious Diseases]

But the chemical weapons that make S. pyogenes so formidable may also contain the means to defeat it. By investigating the bacteria's toxic arsenal, researchers may have also figured out how to turn that mechanism to a patient's own advantage, according to a new study, published online May 10 in the journal Cell.

Other types of bacteria can cause necrotizing fasciitis, including Clostridium, Staphylococcus aureus and Escherichia coli, but S. pyogenes, also known as Group A strep, is the most common culprit, the study authors reported. Infection usually sets in after the bacteria enter the body through a break in the skin, and the disease attacks fascia — the connective tissue surrounding nerves, muscles, blood vessels and fat — and spreads rapidly. In its earliest stages, it brings pain that is "out of proportion" to the infection. In later stages, the infection has a mortality rate as high as 32 percent, the researchers wrote.

Terrible pain signals to an infected host that something is wrong. But in the case of S. pyogenes, its method for inflicting pain also benefits the bacteria by shielding it against host defenses that would normally attack microscopic invaders, the researchers discovered.

In experiments using mice, the scientists found that S. pyogenes produced a toxin called streptolysin S (SLS), which activated certain pain-related neurons to trigger extreme pain. But the toxin also prodded the same neurons into emitting a peptide that disrupted communication with the immune system. In doing so, S. pyogenes effectively muted the body's call to action for disease-fighting cells, leaving the bacteria free to multiply and kill off even more tissue, according to the study.

The peptide also interfered with normal function in the immune cells that did manage to reach the infection site, preventing them from dispensing an enzyme that would kill the invasive bacteria, the scientists reported.

"This neuronal signal silences the alarm system that normally calls on the body’s infection fighters to curb infection," the study's senior author Isaac Chiu, an assistant professor of microbiology and immunobiology at Harvard Medical School, said in a statement.

Based on this observation, the researchers suspected that they could sideline the bacteria's battle plan and treat necrotizing fasciitis with compounds that interacted with neurons — suppressing pain and muffling the release of the peptide that switched off the host's defense responses.

They injected mice with S. pyogenes, as well as another compound: botulinum neurotoxin A, a protein used to smooth facial wrinkles and treat muscle spasms. Botulinum toxin — also known as Botox — works by blocking nerve signals. In the infected mice, this prevented the bacteria from gaining the upper hand, regardless of whether the mice received the nerve-blocking agent before or after they were exposed to S. pyogenes.

In another experiment, the scientists introduced another compound, which blocked the release of the neurotransmitter that paused the host's immune system, also preventing the bacteria from going undetected.

Their work revealed not only that neurons play a pivotal role in the progression of necrotizing fasciitis, but also suggested that manipulating neurons might be a path to treating this terrible disease, the researchers concluded.

"Our findings provide a striking example of how closely intertwined the nervous and immune systems are and how intricate their interaction can be in the setting of infection," Chiu said in the statement.

"Our study also underscores the therapeutic potential of modulating one system to affect the other as a way to treat infection."

The study was done in mice, so more research is needed to confirm whether the same mechanisms apply in humans.