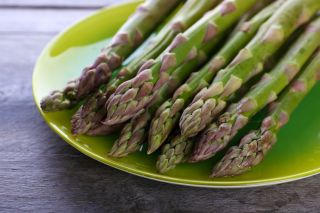 Ah, the aromas of spring. The clean scent of freshly mown grass. The sweet fragrance of lilacs in bloom. But what's causing that sulfurous smell from your urine after eating one of the season's earliest vegetables? It's asparagus, of course. Just what is it that gives "asparagus pee" that pungent smell?

"To me, my urine after I eat asparagus smells like vegetable soup, maybe even a cabbage soup," said Danielle Reed, associate director of the Monell Chemical Senses Center, in Philadelphia, and an author on a 2011 study in the journal Chemical Senses on how people produce and detect those characteristic asparagus-pee odors.

People have been noticing the asparagus smell for decades. Novelist Marcel Proust wrote that it "transforms my chamber-pot into a flask of perfume." Benjamin Franklin commented that "a few stems of asparagus shall give our urine a disagreeable odor."

The asparagus smell is thought to result from the metabolism of asparagusic acid, found in asparagus, into other sulfur-containing compounds, such as methanethiol, the most prominent odorant identified in asparagus pee, along with many others.

These chemicals tend to be volatile — they evaporate easily — which brings them to our noses. [Asparagus: Health Benefits & Nutrition Facts]

"We think that some of the proteins and amino acids in asparagus are metabolized differently by different people, and so people have a different sulfur volatile profile," Reed said.

In fact, as Reed and colleagues realized, the ability to sniff an odor in one's own pee depends on both the sense of smell and the ability to produce the odor in the first place. If someone doesn't notice the asparagus smell, you can't know offhand whether that's because they don't produce it, or they fail to smell it, or both. The scientific literature, too, varies a lot in its estimates of the sources and magnitude of variation in people's ability to smell asparagus pee: Thirty-three and 50 percent of people fail to perceive the asparagus-pee odor, according to two past studies with American populations. In contrast, studies with Israeli and Chinese populations found that almost everyone can, according to Reed and her colleagues. Data from previous studies also showed varying results about the proportion of people who produce the odor, according to Reed's 2011 paper.

Could the variation be genetic?

A 2010 study run by the DNA-sequencing company 23andMe, which was published in the journal PLOS Genetics, identified a genetic component of the ability to smell asparagus pee: a tiny stretch of DNA that often differed between people who said they either noticed a "peculiar odor" when they peed after eating the veggie or they did not. Sex chromosomes aside, we all have two copies of each chromosome and therefore of each gene. People whose DNA sequences had a "G" on both chromosomes at a specific location (had genotype "G/G") were less often able to detect the smell in their urine than those whose DNA read "G" on one chromosome and "A" on the other (genotype "G/A"), or "A" on both chromosomes (genotype "A/A").

The site of variation, located on Chromosome 1 and known as rs4481887, is near genes for several different olfactory receptors, and researchers aren't exactly sure which receptor it may affect, the authors wrote. Yet that genomic study did not reveal whether the gene variants influenced odor production, detection, or both. [6 Easy Ways to Eat More Fruits and Vegetables]

To find out, Monell Institute researchers designed their 2011 study to distinguish between the two abilities. Study participants gave urine samples both before and after eating asparagus. Next, they were asked to smell several pairs of urine samples, one collected post-asparagus eating, one collected pre-asparagus or after eating bread, and asked to identify the one that smelled of asparagus. The researchers also sequenced participants' DNA at rs4481887.

Specifically, 8 percent of subjects failed to produce the odor; and 6 percent of participants failed to detect it. The two abilities, smell production and odor detection, were not tightly linked, the researchers found.

The 2011 study also found that the Chromosome 1 gene variant was associated with the ability to smell the odor, but not the ability to produce it. According to the study, about 75 percent of people with genotype "G/G," were able to detect the asparagus smell, whereas about 90 percent of those with "G/A" or "A/A" genotypes could pick it up.

"That odorant receptor doesn't explain the entire perception of the volatiles of asparagus urine, but it definitely explains part of the acuity that people have," Reed said.

Why do we care?

Hey, if Proust think it's interesting….

Also, differences in abilities to metabolize proteins in asparagus might relate to other, more consequential, health issues, Reed said.

"At a superficial level, it's just of interest to understand that people live in different sensory worlds," she added.