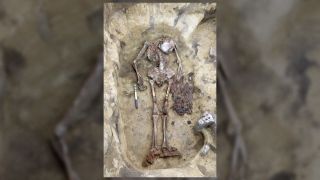 Remains of the "birdman" were found in a grave in the Ust-Tartas archeological site in Western Siberia and date to the Bronze Age.
(Image: © The Siberian Times)

Archaeologists have unearthed a Bronze Age skeleton that was buried with an unusual garment: a collar or headdress made of dozens of bird beaks and skulls.

The so-called birdman's remains, which date to about 5,000 years ago, were discovered at the Ust-Tartas dig site in Siberia's Novosibirsk region, The Siberian Times reported.

The 30 to 50 bird skulls and long beaks were arranged underneath the human skull, "laid as if they meant to cover the neck like a collar," Lidia Kobeleva, a researcher with the Novosibirsk Institute of Archeology and Ethnography in Siberia, told The Times in a video. [The Science of Death: 10 Tales from the Crypt & Beyond]

The collar of beaks and skulls may have been a protective garment like armor, or may have been worn for rituals, Kobeleva said. While the birds have not yet been identified, they were likely large shore birds, such as herons or cranes, according to The Times.

Archaeologists still don’t know exactly how the skulls and beaks were attached to each other or to a piece of fabric, as the scientists have not yet detected any holes drilled into the bones so they could be stitched together, The Times reported.

And the "birdman" had company; the archaeologists discovered a two-tiered grave nearby. An upper layer held the bodies of two children, who were approximately 5 and 10 years old when they died. On the lower level — and underneath a wooden divider — was the skeleton of an adult male.

A number of artifacts were buried with the man. One object the researchers found near the skull was a type of mask made of two bronze hemispheres with circular eyeholes, and a bronze crosspiece, according to The Times. Polished stones near the body were thought to be ceremonial, suggesting that this individual — along with the beak-wearing birdman — conducted rituals for his Bronze Age group.

"Both men must have carried special roles in the society," Kobeleva told The Times.