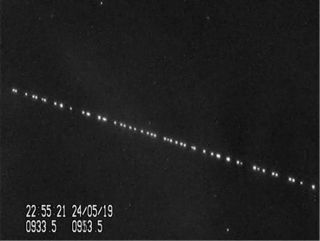 A train of SpaceX Starlink satellites are visible in the night sky in this still from a video captured by satellite tracker Marco Langbroek in Leiden, the Netherlands on May 24, 2019, just one day after SpaceX launched 60 of the Starlink internet communications satellites into orbit.
(Image: © copyright Marco Langbroek via SatTrackBlog)

SpaceX put 60 Starlink satellites in space May 23, the first little chunk of an eventual 12,000-satellite-strong "megaconstellation" that the private company plans to place in orbit. Not long after the launch, observers and astronomers noticed something: This train of five dozen objects looked really bright overhead — unusually bright for artificial satellites. And this light show has many astronomers worried.

"The Starlink satellites just passed directly overhead," Boulder, Colorado-based astronomer Alex Parker tweeted Saturday (May 25). "They were glinting, some as bright as Polaris. Quite an eerie looking thing. And yes, the stars are out."

Parker, an expert in orbital mechanics, caused a stir Saturday by posting the results of some modeling he'd done of the eventual Starlink constellation. Assuming the 12,000 satellites, intended to provide worldwide internet connectivity, were distributed randomly across a wide range of possible orbits, he found, hundreds of them might be visible in the night sky at any given moment as fast-moving, bright dots. [15 Amazing Images of Stars]

There are two problems with this scenario, Parker told Live Science in a Tuesday (May 28) interview.

The first is that none of the telescopes collecting data from the sky are prepared to deal with this many bright, artificial dots flitting across their fields of view.

"When we develop new, big facilities, big observatories, big surveys to go and do things like discover hazardous asteroids, we design them to within an inch of their lives. We do so to make sure that every [risk] is accounted for," he said. "This is one of those confounding factors that, generally speaking, we haven't prepared for because it hasn't been an issue up ‘til now."

And it could be a big issue, he said.

"If you're looking at things that are this bright moving through your field of view, potentially every image or every other image that you collect — depending on the size of your camera and where you're located on the Earth and the time of year — it's easy to intuit that this might be a problem," he said.

It's difficult to know yet just how significant a problem these satellites could be, he said, in large part because of all the unknowns about the eventual megaconstellation. Over what parts of the Earth will the satellites orbit? At what altitude? How will they be oriented? What are their exact dimensions and specifications? All those factors could have a big impact on how the Starlink megaconstellation looks from Earth, Parker said. SpaceX has not released any of that information.

"That's all the information we need in order to anticipate whether these [scientific surveys of the night sky], which are huge national endeavors, are going to succeed," he said.

The second problem with SpaceX cluttering the sky with bright, shiny satellites, Parker said, is that a private company is now in the position to transform i the experience of nighttime-viewing for every human on Earth. [Spaced Out! 101 Astronomy Images That Will Blow Your Mind]

"The sky is a shared cultural, natural resource. Literally, every human that has ever lived has lived under the same sky that we have above us now. And there's value in that. And it's really hard to quantify what the value of preserving the experience of the night sky is," Parker said.

Elon Musk, CEO of SpaceX, initially responded to Parker's calculations on Twitter with a post stating, "sats will be in darkness when stars are visible."

This isn't true, Parker explained to Live Science. When it's nighttime on Earth, he said, one might assume that the sun is directly behind the planet. But in most places, that assumption isn't true. Instead, especially for midlatitudes in summertime, there's a relatively small fraction of the planet between the ground and the sun. Get an object high enough, like a satellite, and it will catch sunlight coming over the nearest pole and reflect it down to the planet. It's unclear why the Starlink satellites seem to reflect so much more light than other satellites in orbit, Parker said, but it's not surprising that they catch the sunlight.

Musk later tweeted that Starlink will have "~0% impact on major advancements in astronomy," pointing out that there are already 4,900 satellites in orbit that people mostly don't notice from the ground. He also said that "we need to move telescopes to orbit anyway."

Later, he also tweeted that "potentially helping billions of economically disadvantaged people [via internet access through the constellation] is the greater good," and that he had "sent a note to Starlink team last week specifically regarding albedo reduction."

Live Science reached out to SpaceX with questions about the details of the eventual megaconstellation and other relevant issues. A SpaceX representative replied by email with links to Musk's tweets and this two-page fact sheet with details about the first Starlink launch, but no details on the satellites' specifications or whether SpaceX believed it had a responsibility to preserve the night sky.

"We're really operating in an information vacuum at the moment," he said. "All we know is that when these launched, they were very bright. "

He noted a sense of powerlessness among his colleagues.

"We don't know what process we can take to raise these concerns," Parker said. "There's nobody we can lobby to make a new requirement… that launches consider the visual impact of satellites. It's not a conversation that's ever had to happen before. And that's where I think part of where you see people getting concerned, is waking up to this issue and the possibility that there's nothing they can do about it."